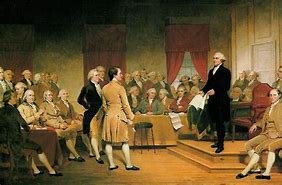 Amid a quagmire of divisiveness Benjamin Franklin, offered his famous appeal for harmony and conciliation, ”an appeal for God’s intervention.”

Although authorized by the Congress of the Confederation, the Constitutional Convention of 1787 was nevertheless cloaked with secrecy and confidentiality. The official papers of the Convention sat in the Department of State, untouched, until 1818. Yet in retrospect, the gathering reveals both the men and the issues they faced during the founding era. Through analysis of both the Philadelphia debates and the various ratification conventions, we realize the concerns and needs of a developing nation.

Men of means and education pursued a limited, federal government capable of providing political and economic stability in a land of diverse sectional interests. The fight for freedom had been experiential; much of the struggle for structure and unity would be theoretical. The doctrines of scholars would meet with the practical necessities of an emerging nation, resulting in a balanced blend of pragmatism and principle, the Constitution of the United States of America.

However, one of the most controversial issues, State’s representation, could have nullified the entire process. Tempers flared and interests clashed as the delegates sought their respective goals. It was within this quagmire of divisiveness that the elder statesman, Benjamin Franklin, offered his famous appeal for harmony and conciliation, ”an appeal for God’s intervention.”

His solicitation seems almost out of character with our current understanding of the man. Wasn’t he a deist, believing in the clock maker God who stepped back to watch the hands of time move toward eternity? Could God govern in the affairs of men, or nations, from such a distance? Perhaps Franklin’s appeal for prayer was out of despair and desperation; perhaps he was senile as some suggest; or perhaps we have misunderstood Franklin’s deism, misreading the man in the coonskin cap.

We have arrived, Mr. President . . . at a very momentous and interesting crisis in our deliberations. Hitherto our views have been as harmonious, and our progress as great as could reasonably have been expected. But now an unlooked for and formidable obstacle is thrown in our way, which threatens to arrest our course, and, if not skillfully removed, to render all our fond hopes of a constitution abortive.

The small progress we have made after 4 or five weeks close attendance & continual reasonings with each other, ”our different sentiments on almost every question, several of the last producing as many noes and ays, is methinks a melancholy proof of the imperfection of the Human Understanding. We indeed seem to feel our own want of political wisdom, some we have been running about in search of it. We have gone back to ancient history for models of Government, and examined the different forms of those Republics which having been formed with the seeds of their own dissolution now no longer exist. And we have viewed Modern States all round Europe, but find none of their Constitutions suitable to our circumstances.

In this situation of this Assembly, groping as it were in the dark to find political truth, and scarce able to distinguish it when presented to us, how has it happened, Sir, that we have not hitherto once thought of humbly applying to the Father of lights to illuminate our understandings? In the beginning of the Contest with G. Britain, when we were sensible of danger we had daily prayer in this room for the divine protection. ”Our prayers, Sir, were heard, and they were graciously answered. All of us who were engaged in the struggle must have observed frequent instances of a Superintending providence in our favor. To that kind providence we owe this happy opportunity of consulting in peace on the means of establishing our future national felicity. And have we now forgotten that powerful friend? I have lived, Sir, a long time, and the longer I live, the more convincing proofs I see of this truth- that God governs in the affairs of men. And if a sparrow cannot fall to the ground without his notice, is it probable that an empire can rise without his aid? We have been assured, Sir, in the sacred writings, that “except the Lord build the House they labour in vain that build it.” I firmly believe this; and I also believe that without his concurring aid we shall succeed in this political building no better than the Builders of Babel: We shall be divided by our little partial local interests; our projects will be confounded, and we ourselves shall become a reproach and bye word down to future ages. And what is worse, mankind may hereafter from this unfortunate instance, despair of establishing Governments be Human Wisdom and leave it to chance, war and conquest.

I therefore beg leave to move, that henceforth prayers imploring the assistance of Heaven, and its blessings on our deliberations, be held in this Assembly every morning before we proceed to business, and that one or more of the Clergy of the City be requested to officiate in that service.” – Benjamin Franklin

The real strength of Franklin’s motion, from the conservative viewpoint, is as an example of his supposed “deism,” which is a far cry from what some would make it out to be. Franklin obviously felt that God governed in the affairs of men, not exactly the general understanding of today’s deism. But many people attempt to anachronously impose today’s definition upon Franklin, Jefferson, and others, implying they had nothing whatsoever to do with religion. This is usually done to support a broad, separationist approach to religion and government, which is inconsistent with the words and deeds of those who created America’s political system. 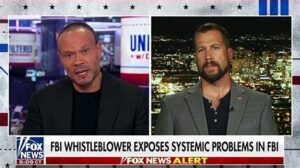 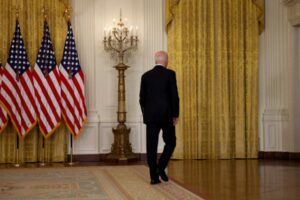 ‘The pandemic is over’ Biden tells 60 Minutes