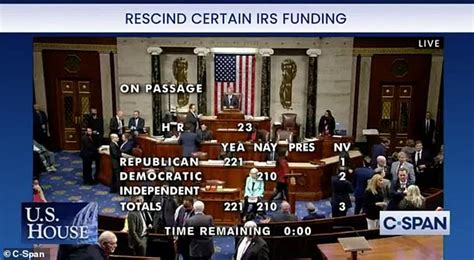 The House Republican majority passed a bill Monday night to claw back $72 billion from the Internal Revenue Service, making good on a pledge to voters to ‘repeal 87,000 IRS agents.’

It was a party-line vote of 221 to 210, with one Republican and two Democrats not voting.

‘Promises made,’ House Speaker Kevin McCarthy said as he banged the gavel and Republicans in the House chamber cheered.

The legislation, called the Family and Small Business Taxpayer Protection Act, would take away all but $8 billion of the $80 billion passed in the Inflation Reduction Act to bolster the ranks of the IRS.

The bill will be dead on arrival in the U.S. Senate, which is still controlled by the Democrats – 51 to 48, as Republican Nebraska Sen. Ben Sasse left to become president of the University of Florida on Monday.

Even if 12 Senate Democrats voted alongside Republicans to override a filibuster threat, the legislation would be killed by President Joe Biden’s veto pen.

In April 2021, the U.S. Centers for Disease Control (CDC) and the Food and Drug Administration (FDA) issued a statement pausing the administration of the Johnson & Johnson Covid-19 vaccine after it caused severe blood clotting in 6 female recipients. After this news broke, Facebook contacted the Biden regime to ensure them that the social media platforms would “amplify any messaging” to convince the public the shot was safe and effective.

The New Civil Liberties Alliance (NCLA) is currently part of a lawsuit that was filed by the Attorneys General of Louisiana and Missouri which alleges improper collusion between the federal government and social media companies. The emails between Facebook and the White House were obtained in discovery.

In their communications with the White House, Facebook asked how they could “get ahead” of possible doubt or fear arising in the general public about Covid vaccines.

One employee – whose name is redacted due to a court order – sent a message to Andrew Slavitt, the Biden administration’s senior advisor for the Covid response, along with Director of Digital Strategy Rob Flaherty and Director of Strategic Communications and Engagement for the Covid-19 Response Team Courtney Rowe. In the email, the employee wrote,

“Re the J+J news, we’re keen to amplify any messaging you want us to project about what this means for people – it obviously has the risk of exacerbating vaccine hesitancy, so we’re keen to get ahead of the knock-on effect. Don’t hesitate to tell me – or via your teams – how we can help to provide clarity/reassurance via Facebook.”

In response to the email, Flaherty gave the employee some suggestions on how Facebook could shut down anyone questioning the safety of the vaccine, such as telling users that “adverse effects are very rare.” Flaherty also requested a “commitment from [Facebook] to make sure that a favorable review [of the vaccine] reaches as many people as the pause, either through hard product interventions or algorithmic amplification,” ensuring that “the news about J&J doesn’t spin off misinformation.”

In an email sent to a Facebook employee on April 14, 2021, White House Director of Digital Strategy Rob Flaherty wrote, “Since we’ve been on the phone – the top post about vaccines today is Tucker Carlson saying they don’t work. Yesterday it was Tomi Lahren saying she won’t take one.”

The emails are the latest in a string of revelations about the extent of collusion between the Biden Administration and tech companies to suppress coronavirus debate.

Landry secured the emails through Louisiana and Missouri’s lawsuit against the administration, which alleges it conspired with tech companies to suppress the First Amendment rights of American citizens.

The emails show Flaherty stating, “This is exactly why I want to know what ‘Reduction’ actually looks like — if ‘reduction’ means ‘pumping our most vaccine hesitant audience with Tucker Carlson saying it doesn’t work, then… I’m not sure it’s reduction!”

Facebook speedily responded, with an employee assuring Flaherty that the company was “running this down.”

In a follow-up email, Facebook also assured the White House that it would censor Robert Kennedy Jr., a vocal vaccine skeptic.

The revelations came shortly before a new release of the Twitter Files, released via journalist and critic of coronavirus policy Alex Berenson, which revealed Pfizer used the same lobbyist as the White House to pressure the platform to suppress debate on coronavirus vaccines.

Details out of Missouri v Biden have revealed that the Biden administration pressured social media companies, including Twitter and Facebook, to censor users online who were posting information the White House deemed “Covid misinformation.”

The discovery phase of a free speech lawsuit from GOP state attorney generals, represented by the  New Civil Liberties Alliance, has revealed that the Biden administration pressured social media companies, including Twitter and Facebook, to censor users online who were posting information the White House deemed “Covid misinformation.”

The details of the censorship efforts out of the White House emerged on January 6 as part of Missouri v Biden, brought by Missouri Attorney General Eric Schmitt along with Louisiana’s AG and four additional private plaintiffs including epidemiologists Martin Kulldorff and Jay Bhattacharya, with attorneys from the New Civil Liberties Alliance.

“You are hiding the ball,” Flaherty wrote to a Facebook executive on March 14, 2021, and included an article from the Washington Post on the “spread of ideas that contribute to vaccine hesitancy.”

“I think there is a misunderstanding,” the executive responded.

Another email exchange from March 21 and 22, 2021, had Flaherty again telling the exec to intervene over online posts expressing “skepticism” over the Covid vaccine. Flaherty also said he was “confused about how you’re measuring reduction of harm on” on WhatsApp, especially “given its reach in immigrant communities and communities of color.”

Flaherty asked the exec on April 9, 2021 what “actions and changes” Facebook was taking so the company was not “not making our country’s vaccine hesitancy problem worse.”

Flaherty acknowledged that Facebook instituted an “algorithmic shift that promoted quality news and information about the election” but only “after an election that you helped increase skepticism in, and an insurrection which was plotted, in large part, by your platform.”

“I want some assurances, based in data, that you are not doing the same thing again here,” Flaherty said.

In subsequent emails in April of the same year, Flaherty asked why Facebook allowed a “top post about vaccines today” from Tucker Carlson.

“I want to know what ‘Reduction’ actually looks like,” Flaherty said.

Then on April 23, 2021, Flaherty sent the exec a White House internal memo that read, “Facebook plays a major role in the spread of COVID vaccine misinformation.”

In April, Flaherty also told an executive at Google that there was “more work to be done” at the company to reduce “Covid-19 misinformation.”

As the Wall Street Journal reports, “The First Amendment bars government from engaging in viewpoint-based censorship.”The revelations out of Missouri v Biden corroborate details released in the Twitter Files, a series of reports detailing conversations at Twitter over several years concerning the company’s efforts towards censorship, especially concerning Covid, and information suppression along with collusion with government agencies towards those goals.