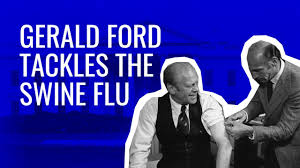 Judi Roberts was a perfectly healthy young woman when she took a swine flu vaccine in November 1976. Two weeks later, she felt numbness starting up her legs, and by the following week, she was totally paralyzed.

Roberts, the wife of Polk Republican Party Chairman Gene Roberts, was a quadriplegic for six months and confined mostly to a wheelchair for over a year. She was diagnosed with Guillain-Barre Syndrome (GBS), a rare disorder in which the body’s immune system attacks the nerves. Weakness and tingling in the extremities are usually the first symptoms of the disease.

In a 1979 interview with the CBS investigative news program “60 Minutes,” Roberts related that, at that time, she felt vaccination was her only chance to survive a potential “major epidemic.”

“I’d never taken any other flu shots, but I felt like this was going to be a major epidemic, and the only way to prevent a major epidemic of a really deadly variety of flu was for everybody to be immunized,” she told host Mike Wallace. “If this disease is so potentially fatal that it’s going to kill a young, healthy man, a middle-aged schoolteacher doesn’t have a prayer.”

It all began at an Army training base in New Jersey. In February 1976, several soldiers at Fort Dix fell ill with flu-like symptoms. Testing revealed that the virus had spread to more than 200 recruits.

An Army doctor sent samples of their throat cultures to the New Jersey Public Health Lab to find out what kind of virus was going around. One of those samples was from Private David Lewis, who had left his sickbed to go on a forced march. Lewis had collapsed on that march and died a few days later.

The New Jersey lab identified the normal kind of flu virus going around that year in most of the soldiers’ throat cultures. Swine flu was only identified in the throat cultures from Lewis and four other soldiers, who recovered completely without the swine flu vaccine.

“If I had known at that time that the boy had been in a sick bed, got up, went out on a forced march and then collapsed and died, I would never have taken the shot,” Roberts said.

You can watch the “60 Minutes” feature on swine flu “scamdemic” here:

Scientists give advice based on incomplete knowledge then and now

Following the much-publicized swine flu “outbreak” at Fort Dix, President Gerald Ford convened a high-profile meeting of scientists to decide if there should be a vaccination program. However, “this was interpreted to be a political event rather than a scientific process,” according to David Sencer, the then-director of the Center for Disease Control, now known as the Centers for Disease Control and Prevention (CDC).

Like what happened throughout the coronavirus (COVID-19) pandemic, the scientists in 1976 could only give the best advice they had based on incomplete knowledge. Many public health officials were skeptical and uncertain too, including Pascal Imperato – the deputy health commissioner and the chair of the task force charged with rolling out the swine flu vaccination program in New York at that time.

“I think all of us were in agreement that yes, it’s probably unlikely but we can’t be absolutely sure,” Imperato said, talking about the possibility of a swine flu pandemic and whether or not a vaccination program was needed then.

In March 1976, Ford announced a $137 million effort to produce a vaccine by the autumn. “Its goal was to immunize every man, woman and child in the U.S., and thus was the largest and most ambitious immunization program ever undertaken in the country,” wrote Pascal Imperato in a 2015 paper reflecting on the events.

Around 46 million Americans took the vaccine. Some 4,000 people suffered devastating side effects from the vaccine. They sued the government for damages amounting to $3.5 billion. Two-thirds of the claims were for neurological damage that led to death in some cases.

But the form didn’t mention that the scientists developed another vaccine and that it was the one mostly used in the swine flu vaccination program. That vaccine was called “X-53a.” Sencer, appearing in the same episode of “60 Minutes” in which Roberts was interviewed, couldn’t give a direct answer when Wallace asked him whether X-53a had been tested.

With hindsight, it’s easy to see that the fears at the time were unfounded. The swine flu strain spotted at Fort Dix was not dangerous at all and there would be no pandemic. Later, researchers discovered that benign swine flu strains had been circulating in the U.S. population long before the one identified at the military base.

Thousands suffered and hundreds died from the mass vaccination efforts by the government in 1976 to combat a pandemic that never happened.

Millions of vaccinations resulted to dozens of GBS cases. The syndrome was less understood in the 1970s. Research has since found that the chances of developing the condition after vaccination are extremely small, but the scale of the 1976 rollout meant that a handful of people were bound to be affected.

The vaccine-inflicted GBS in 1976 caused suffering among an unlucky group of people, including Roberts. After months of negative media coverage, reports of GBS cases brought an end to the swine flu affair. Ford’s program was suspended in December 1976 with just over 20 percent of the U.S. population vaccinated.