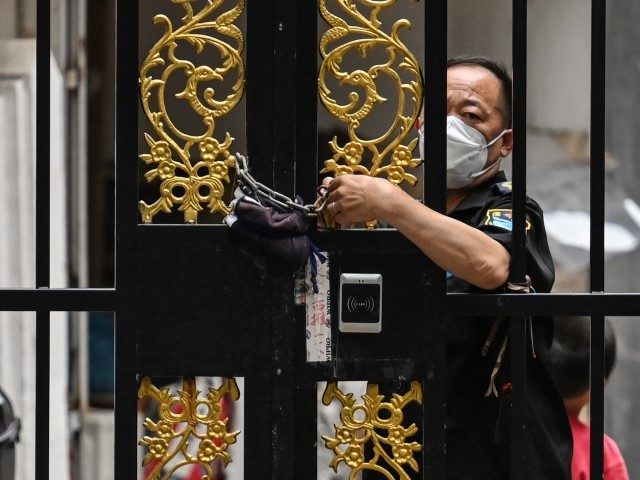 The huge Chinese city of Chengdu, capital city of Sichuan province, extended its coronavirus lockdown and mass testing program on Sunday, trapping most of its 21 million citizens in their homes. At least 70 cities are now under full or partial lockdown, including the city where the Covid-19 pandemic began, Wuhan.

Chengdu went under lockdown on Thursday, to the surprise and terror of its inhabitants, who were given no time to prepare. On Sunday, city officials announced the lockdown would be extended for most of the city, with the exception of two small districts.

No timetable for ending the lockdown was given, but officials said mass testing would continue through Wednesday to reach “Covid Zero in the community as soon as possible.” Supposedly only 185 coronavirus cases have been detected in the entire province.

Several major foreign corporations have facilities in Chengdu. Volkswagen and Foxconn said they will keep their factories running under a “closed loop system,” which essentially means quarantining employees at the factory so they can keep working, often requiring them to sleep on the factory floor. Hitachi announced its two Chengdu factories would continue running at “reduced capacity,” while Volvo suspended production at its plant.

The New York Times (NYT) on Monday spoke to Chengdu residents who said “everyone is scared” the city will end up like Shanghai, which was locked down for two months this spring, forcing imprisoned citizens to scramble for food and medicine.

Residents told the NYT food deliveries are running slow or being canceled entirely, and the city’s mass testing system collapsed under stress – a serious problem given that recent negative test results are required for anyone attempting to leave home and obtain supplies.

“Personally, I’m extremely fed up with and not supportive of these policies. But there’s nothing I can do. I can only wait,” sighed a man from another city who was trapped in Chengdu by the lockdown.

Chengdu already resembles the Shanghai horror in several respects, including panicked shoppers scrambling for food and drones flying through deserted streets to broadcast orders like “This community is now in complete lockdown! Stay indoors!”

Meanwhile in the Democrat hellhole of California…

Thousands of customers across the Bay Area were without power Monday afternoon amid a blistering heat wave.

Californians were strongly urged to use less energy today between 5pm to 9pm to avoid rotating blackouts.

People were urged to turn off appliances, turn up their thermostats and avoid charging electric vehicles during the peak hours.

More than 20,000 customers in North Bay, East Bay and South Bay were without power Monday afternoon.

Temps in Sacramento reached 115 degrees today and now customers in the area are without power.

Pacific Gas & Electric is reporting massive power outages across the Bay Area as the region sees high temperatures throughout the day. The North Bay, East Bay, and South Bay have all been hit hard by outages Monday afternoon.