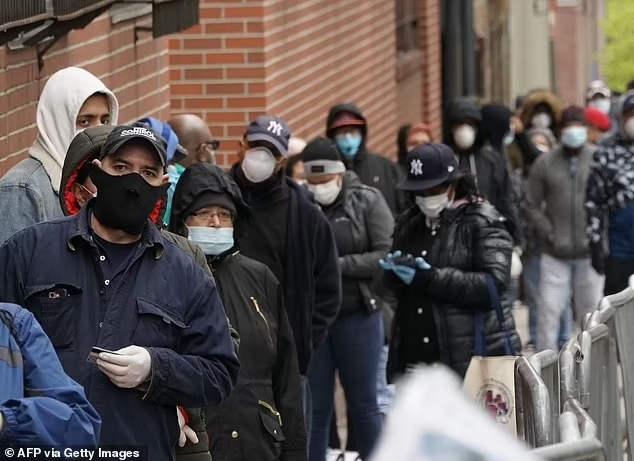 Fraudsters stole nearly $46billion in unlawful unemployment claims during the pandemic, the Labor Department concluded on Thursday – while warning that the actual figure may be even higher.

Criminals used inventive measures to access the COVID benefits, with more than 205,000 Social Security numbers that belonged to dead people being used to claim the cash.

Some schemes saw the Social Security numbers of prisoners being used, despite them being ineligible for the unemployment benefits.

The latest figure is more than double the earlier estimate, issued by the Labor Department last year, when they concluded that $16 billion had been stolen.

‘I’ve long said we need a national set of technology and security standards for state systems to better prevent this kind of fraud, and we’re going to keep working to get our reforms passed,’ he said.

The Labor Department inspector general said 190,000 investigations have been opened into fraud since the pandemic began.

Separately, the Justice Department on Thursday said that 1,000 people have now been charged with COVID-related fraud.

The House of Representatives passed legislation on Wednesday to overhaul the 1887 Electoral Count Act and re-write election rules to benefit Democrats in presidential contests.

The bill, proposed by GOP Wyoming Rep. Liz Cheney and Rep. Zoe Lofgren, a Democrat from California who is under Cheney on the Jan. 6 Committee, reforms the 135-year-old law to narrow the grounds for objections to presidential electors and open the door to late-day voting.

Cheney’s “Presidential Election Reform Act” became the Democrats’ answer to their failed effort to override state election laws in H.R. 1, which Senate Republicans blocked last summer. The legislation carries some of the same provisions of the doomed election bill at the top of Democrats’ congressional agenda. Just nine Republicans supported the bill, all but one of whom supported President Donald Trump’s second impeachment and are either retiring or have lost their primaries.

New York Republican Rep. Claudia Tenney, who co-chairs the Election Integrity Caucus, condemned the bill as “the latest attempt from House Democrats to stack the democratic process in their favor” and complained that the proposal did not go through the proper legislative process. The text was only released days before the Wednesday vote and received no bipartisan hearing or markup in committee.

“It is nothing more than a partisan messaging bill intended to score cheap political points weeks before an election,” Tenney said in a press release outlining the legislation’s flaws.

“The bill broadly defines a ‘catastrophic event,’ which could be used to extend balloting for up to five days after the polls close in a presidential election,” Tenney said. “It also tramples on the core principle of state sovereignty and directly contradicts the United States Constitution. The legislation also creates broad private rights of action in a backdoor to empower Democrat election lawyers and partisan operatives.”

The congresswoman from central New York called on her colleagues to outlaw the private takeover of elections through “Zuckerbucks” and boost security at the ballot box.

Illinois Republican Rep. Rodney Davis similarly condemned the bill’s expedited passage through the lower chamber on the House floor and highlighted the hypocrisy over electoral objections.

“Democrats have objected to every single Republican presidential win in the 21st century,” Davis said.

“I believe what the House Democrats and the Jan. 6 Committee are doing is irresponsible and wrong,” Davis said. “They have allowed their dislike for one man, President Trump, to cloud their judgment and guide their actions — no matter the consequences to this institution or the Constitution that they claim to want to uphold.”

According to Axios, similar legislation in the upper chamber has already drawn support from the 10 Republicans needed in the split Senate to circumvent a filibuster.

Parler, a social network popular with conservatives, is restructuring to focus on providing services to online businesses at risk of being forced off the internet for controversial content.

The company, which itself was knocked offline after the U.S. Capitol riot last year, said it bought a cloud-services provider that will serve clients that want to be able to operate without being penalized because of political ideologies.

“We want to become a business powering what I call the uncancellable economy,” Chief Executive Officer George Farmer said in an interview. “We are not going to cancel people for their opinions.”

As part of the restructuring, Parler created a new parent company, Parlement Technologies Inc. The new company has completed a fundraising round for $16 million, bringing the total amount raised to $56 million. Mr. Farmer is the CEO of Parlement as well.

Nashville, Tenn.-based Parlement also said Friday that it has acquired Dynascale Inc., a provider of cloud services with around 50,000 square feet of data center space in the U.S. It has $30 million in annual recurring revenue and several hundred enterprise customers, according to Parlement, which declined to disclose the terms of the deal.

Launched in 2018, Parler bills itself as a free-speech alternative to larger social networks such as Facebook and Twitter. It says it doesn’t use algorithms to provide content recommendations.

Parler exploded in popularity in the run-up to the 2020 U.S. presidential election. Following the U.S. Capitol riot, Parler was removed from Apple Inc.’s App Store and Alphabet Inc.’s Google Play. Amazon.com Inc. stopped providing web-hosting services to the company, effectively knocking the social network offline. At the time, the tech companies said Parler had violated terms of service agreements, citing some of the content posted on its platform.

Parler sued Amazon in Seattle federal court, alleging that Amazon Web Services kicked the company off its cloud servers for political and anticompetitive reasons. The company said Parler was suspended for not removing violent content that violated AWS’s terms of service. The case is ongoing.

Parler resumed operations online by signing up with a different cloud provider. It was reinstated on the App Store in May 2021 after agreeing to add technology to detect violent content or incitements to violence. It returned to Google Play earlier this month after agreeing to modify some of its content-moderation policies and enforcement.

With Parlement’s acquisition of Dynascale, it has about 100 employees, and Parler’s online infrastructure is all controlled in-house, said Mr. Farmer.

“Everything is homegrown,” he said. “We know how to operate our own tech stack, our own security.”

Parler has roughly 16 million registered users, Mr. Farmer said. It competes with other platforms, including former President Donald Trump’s Truth Social, which launched in the U.S. in February. Parlement would consider offering its services to Truth Social if it wanted them, Mr. Farmer said.

“We’re already talking to a large range of conservative businesses,” he said.

Mr. Farmer, 32 years old, was named CEO of Parler in May 2021, succeeding interim chief Mark Meckler, who left the social network. Mr. Farmer joined Parler earlier that year as operating chief and has worked in financial services for about a decade. A prominent U.K. conservative, he is married to Candace Owens, an American conservative author and commentator.

“The endgame is to become more of an infrastructure and services business rather than the legacy social-media business,” he said.