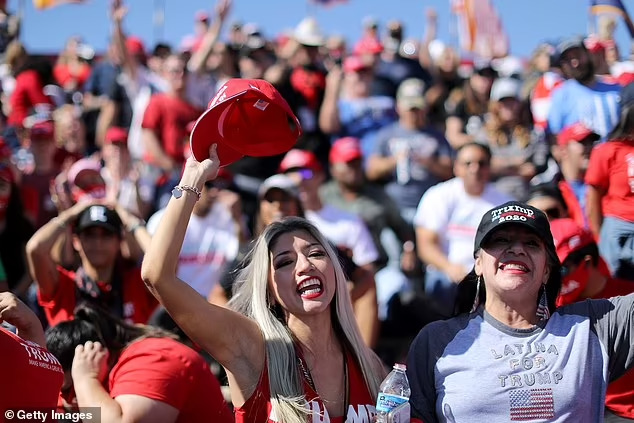 Members of the fast-growing demographic tack right on immigration, abortion, inflation, and crime in what could be a midterm ballot game-changer, polls show

Nearly a quarter of Latino voters have not yet decided who they will vote for in the upcoming midterm elections — creating a significant unknown for a group that has drifted towards the Republicans in recent years.

Even a small loss of support among Hispanics — a key part of the Democratic coalition of voters that brought President Joe Biden to power — could mean the loss of the House of Representatives and possibly the Senate for Democrats.

The polling group’s Cliff Young said they were the ‘swing voters of the 2022 election’.

More than a third (37 percent) of respondents in the survey of 1,005 Latino and Hispanic voters said inflation, which is at a nearly four-decade high, as one of their top concerns — an issue that is set to hurt Democrats in the midterms.

Americans of all backgrounds rank inflation is a priority.

But studies show people of color, especially black and Latino households, spend proportionally more of their income on staples prone to price hikes such as food and gas and that inflation hits them hardest.

Only 12 percent of Latinos cited abortion as a priority. Access to the procedure, which lost its federal protections four months ago under a decision of the conservative-loaded Supreme Court, is a major campaign issue for Democrats.