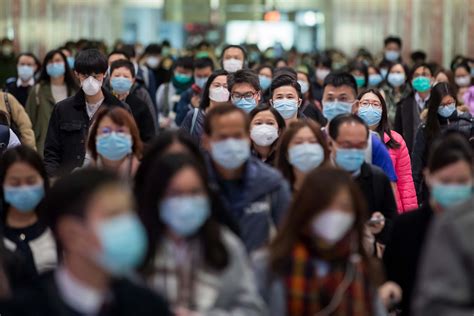 Nearly 37 million people in China may have been infected with Covid-19 on a single day this week, according to estimates from the government’s top health authority, making the country’s outbreak by far the world’s largest.

As many as 248 million people, or nearly 18% of the population, likely contracted the virus in the first 20 days of December, according to minutes from an internal meeting of China’s National Health Commission held on Wednesday, confirmed with people involved in the discussions. If accurate, the infection rate would dwarf the previous daily record of about 4 million, set in January 2022.

Beijing’s swift dismantling of Covid Zero restrictions has led to the unfettered spread of the highly contagious omicron variants in a population with low levels of natural immunity. More than half the residents of Sichuan province, in China’s southwest, and the capital Beijing have been infected, according to the agency’s estimates.

How the Chinese health regulator came up with its estimate is unclear, as the country shut down its once ubiquitous network of PCR testing booths earlier this month. Precise infection rates have been difficult to establish in other countries during the pandemic, as hard-to-get laboratory tests were supplanted by home testing with results that weren’t centrally collected.

The NHC didn’t respond to a request for comment faxed by Bloomberg News. The commission’s newly founded National Disease Control Bureau, which oversees the Covid response, also didn’t respond to phone calls and faxes on Friday.

A Chinese-born painter based in northern Italy is behind one of the most popular Twitter accounts sharing information about the recent wave of protests against Covid-19 restrictions in China. Since the rare demonstrations erupted across China in late November, the artist identified only as “Teacher Li” has skirted China’s censorship apparatus to repost sensitive protest-related media. He spoke with Reuters on December 12, 2022, about his experience.

Nearly 37 million people may have reportedly contracted COVID-19 in China on a single day — an alarming surge which is raising fears that a dangerous new variant could emerge.

Minutes from an internal meeting of the National Health Commission revealed that as many as 248 million people — nearly 18% of China’s population — came down with the virus in the first 20 days of December, with a surge that began in Beijing spreading to rural regions, Bloomberg News reported.

Some 37 million may have been infected on Dec. 20 alone, the news outlet reported.

It is unclear how Chinese health officials arrived at the estimate since the government doesn’t release detailed data on COVID and the country’s network of PCR testing booths was shut down earlier this month.

But the disturbing uptick is worrying medical experts and others in the US and abroad.

“There will certainly be more omicron subvariants developing in China in the coming days, weeks and months, but what the world must anticipate in order to recognize it early and take rapid action is a completely new variant of concern,” Daniel Lucey, a fellow at the Infectious Diseases Society of America and professor at Dartmouth University’s Geisel School of Medicine, told Bloomberg.

Almost 250 million people in China may have caught Covid-19 in the first 20 days of December, according to an internal estimate from the nation’s top health officials, Bloomberg News and the Financial Times reported Friday.

If correct, the estimate – which CNN cannot independently confirm – would account for roughly 18% of China’s 1.4 billion people and represent the largest Covid-19 outbreak to date globally.

The figures cited were presented during an internal meeting of China’s National Health Commission (NHC) on Wednesday, according to both outlets – which cited sources familiar with the matter or involved in the discussions. The NHC summary of Wednesday’s meeting said it delved into the treatment of patients affected by the new outbreak.

On Friday, a copy of what was purportedly the NHC meeting notes was circulated on Chinese social media and seen by CNN; the authenticity of the document has not been verified and the NHC did not immediately respond to a request for comment.

Both the Financial Times and Bloomberg laid out in great detail the discussions by authorities over how to handle the outbreak.

Among the estimates cited in both reports, was the revelation that on Tuesday alone, 37 million people were newly infected with Covid-19 across China. That stood in dramatic contrast to the official number of 3,049 new infections reported that day.

The Financial Times said it was Sun Yang – a deputy director of the Chinese Center for Disease Control and Prevention – who presented the figures to officials during the closed-door briefing, citing two people familiar with the matter.

Sun explained that the rate of Covid’s spread in China was still rising and estimated that more than half of the population in Beijing and Sichuan were already infected, according to the Financial Times.

The estimates follow China’s decision at the start of December to abruptly dismantle its strict zero-Covid policy which had been in place for almost three years.

China Covid: ‘Everyone I know is getting a fever’

A sudden lifting of many of China’s Covid restrictions has caused nationwide outbreaks – as well as confusion and anger on social media.

Amid a severe shortage of rapid test kits, several provinces like Zhejiang and Anhui, as well as Chongqing, are implementing a new policy that allows people with mild symptoms or no symptoms to go back to work.

On Weibo, China’s equivalent of Twitter, the hashtag related to this announcement has been read 33 million times since Monday. There is shock and fury.

“There has been no preparation in the past three years, and all of a sudden the restrictions are lifted and you are allowed to go to work while ill – our lives are worthless like ants,” a comment with 200 likes reads.

“Just several months ago, people would get arrested for going to work while testing positive,” reads another comment with almost 1,000 likes.

Even some overseas Chinese who returned to the country after a recent shortening of the hotel quarantine period are surprised to find out how fast the virus is spreading.

“I had never had Covid in the past few years while living abroad, but got it several days after came back… Everyone I know is getting Covid and having a fever – so if you can stay out of the country recently, don’t come back,” one user on another popular social media platform Xiaohongshu wrote.

In the past two weeks, the Chinese internet has been flooded with posts of how people were pulling through after contracting the virus.

Videos have circulated in Chinese media of young children with no symptoms bringing food and water to their unwell parents.

Some have shown the creative ways they navigate social-distancing while in the same household to avoid infecting relatives.

Social media platforms in China often seek to amplify positive news in the face of adversity in their lists of “trending” stories.

The hashtag #PersistentDoctorsandNursesWorkHard has been trending in the last 24 hours, with state media praising their front-line contribution.

But the independent South China Morning Post has been reporting in the last week on how fresh protests have erupted among medical students demanding “better pay” and protection on China’s front line.

No mention has been made of these in state media. However, images and videos of protests are routinely censored, as they represent dissatisfaction with the status quo.

This was what happened when protests erupted across the country at strict Covid-19 measures last month.

Nevertheless, stories of the health sector being overstrained have been evident. Thousands of retired medical workers have been brought back to the front line, as media have been reporting on “long queues” outside outpatient centres, and fever clinics being under “heavy pressure”.

Papers in multiple major cities have acknowledged that the number of calls to the emergency services is “rising” and have urged people not to call unless absolutely necessary.

More than 10 million social media users have watched a video posted in the last 24 hours of a man on his knees, begging for his child to be treated at a fever clinic in Guangdong, the province with the highest number of cases.

The doctor responds, saying: “I am also on my knees… this is what it’s like, there are queues for 6-8 hours.

“Everyone is waiting, children and the elderly – you are not the only one.”