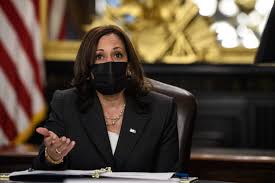 Her last solo public appearance was on August 12, as she met with business leaders to discuss the importance of childcare and paid leave benefits.

Harris last appeared publicly with President Joe Biden on August 10 as they celebrated the president’s proposed infrastructure deal passing the Senate with a bipartisan majority.

The vice president was spotted in a photo released by the White House over the weekend showing President Biden attending a video conference from Camp David with Harris and other administration officials.

Officialy, Harris was expected to remain in Washington, DC, during the August recess. But she has completely vanished from public view. Curiously, White House reporters were told that Harris would attend President Joe Biden’s speech defending his actions during the disastrous fall of Afghanistan.

But she did not appear that night, instead watching the president’s speech from the green room, aides told reporters.

It is unclear why Harris has distanced herself from the president in recent days.

The vice president is on the record defending Biden’s decision to withdraw troops from Afghanistan in an interview with CNN on April 25th. The vice president is also scheduled to leave Friday for a previously planned trip to Vietnam and Singapore, despite the unprecedented chaos surrounding the administration regarding Afghanistan.