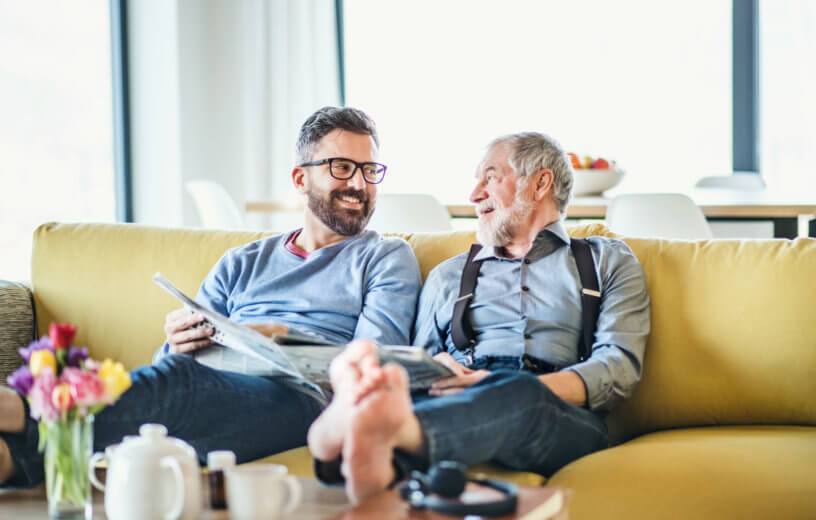 NEW YORK —Conversation may be the key to a healthy mind, a new study reveals. Researchers from New York University find that having a good listener in your life, such as a close friend or relative, boosts brain power and may stave off the onset of Alzheimer’s.

The team says supportive interactions protect against mental decline, even in younger people. Conversely, those in their 40s and 50s with no one to talk to displayed a cognitive age at least four years older than their peers.

“These four years can be incredibly precious. Too often we think about how to protect our brain health when we’re much older, after we’ve already lost a lot of time decades before to build and sustain brain-healthy habits,” says lead author Professor Joel Salinas in a university release.

“But today, right now, you can ask yourself if you truly have someone available to listen to you in a supportive way, and ask your loved ones the same. Taking that simple action sets the process in motion for you to ultimately have better odds of long-term brain health and the best quality of life you can have.”

Talking out your problems can make you more resilient

The study finds participants who had a shoulder to lean on the most displayed greater cognitive resilience. Researchers say this trait is the brain’s ability to function better than would be expected for an individual’s age.

The risk of brain-related illnesses, ranging from dementia to depression, also drops among people who have more social interactions. These conversations act like a flexible and fast-thinking back-up system for our grey and white matter. Neurologists believe stimulating activities, physical exercise, and positive conversations can all boost the brain.

“We think of cognitive resilience as a buffer to the effects of brain aging and disease,” Prof. Salinas explains.

“This study adds to growing evidence that people can take steps, either for themselves or the people they care about most, to increase the odds they’ll slow down cognitive aging or prevent the development of symptoms of Alzheimer’s disease—something that is all the more important given that we still don’t have a cure for the disease.”

Listening can be a life-saving ability

The results come from MRI scans and neuropsychological assessments of 2,171 people across the United States. These participants self-reported data on their social networks including information on the availability of listening, good advice, love, and affection. The team also looked into the group’s contact with people they were close with and emotional support.

Study authors scored cognitive resilience by total cerebral brain volume relative to global cognition. Prof. Salinas says one specific form of social support was identified as the key to cognitive resilience – listener availability. He recommends doctors ask patients if they have access to someone when asking them about their social history during check-ups.

“Loneliness is one of the many symptoms of depression, and has other health implications for patients,” Prof. Salinas continues. “These kinds of questions about a person’s social relationships and feelings of loneliness can tell you a lot about a patient’s broader social circumstances, their future health, and how they’re really doing outside of the clinic.”