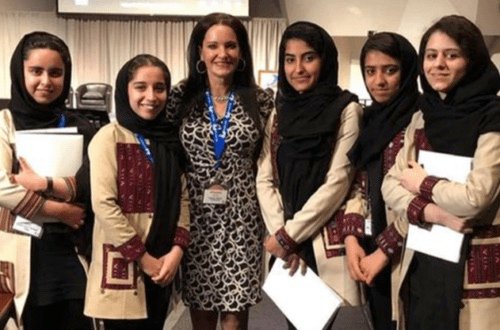 An Oklahoma mom heroically made the decision to fly to the middle east in an effort to save as many members of the Afghan’s Girls Robotics Team as possible. The mother to 11-children, Allyson Reneau is a Harvard graduate who holds a Master’s degree in international relations and US space policy.

After watching the news, horrified by the deteriorating situation in Afghanistan as Taliban forces advanced, 60-year-old Reneau, took it upon herself to try and save members of the Afghan Girls Robotic Team. A call to Senator Jim Inhofe (R-Ok), a ranking member of the Armed Services Committee was her first thought, but the Senator was focused on rescuing Americans trapped overseas.

Desperate to help the girls, Reneau took the next step, as the New York Post reports: She flew into Qatar on Aug. 9 after making a “Hail Mary” call to a former roommate at the US Embassy there – to help get the girls from the advancing Taliban, known for their oppressive treatment of women.

According to NBC, Reneau is still working to get 25 more girls from the team to safety.