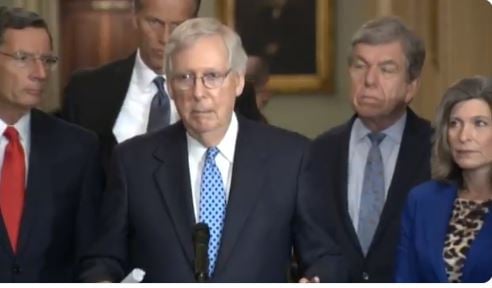 You can always count on so-called Republicans to give Joe Biden and Democrats a hand-up when they are down.

Last month Mitch McConnell and 18 fellow Republicans voted for a Democrat spending plan that opened the door to the Green New Deal, ballot harvesting, and the destruction of the American dollar.

They really are not on your side.
Don’t fool yourself.

Senate GOP Leader Mitch McConnell (Ky.) on Wednesday shot down calls from within his own party to try to impeach President Biden, pointing to next year’s midterm election as a potential check on the administration.

“Well, look, the president is not going to be removed from office. There’s a Democratic House, a narrowly Democratic Senate. That’s not going to happen,” McConnell said at an event in Kentucky, asked if Biden’s handling of the drawdown in Afghanistan merits impeachment and if he would support it.

“There isn’t going to be an impeachment,” he added.