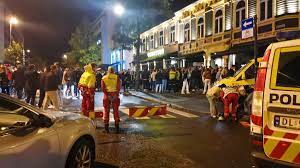 Norway has lifted all lockdown restrictions with less than 24 hours notice, sparking rowdy celebrations, with mass brawls and revellers passing out in nightclub queues after 561 days of restrictions came to an end.

The Norwegian government abruptly announced on Friday it was going to lift the remaining social distancing requirements on Saturday at 4pm, meaning that nightclubs could open and restaurants and bars could fill to capacity.

‘It has been 561 days since we introduced the toughest measures in Norway in peacetime,’ Prime Minister Erna Solberg told a news conference. ‘Now the time has come to return to a normal daily life.’

The PM’s unexpected unlocking kicked off boozy celebrations the following afternoon which lasted late into Saturday night, with an impromptu rave in Stavanger, a mass brawl in Tønsberg and no less than 50 fights reported to police in Oslo.

Neither vaccination status nor a negative test result was required for any venue, leading to blockbusting queues outside nightclubs and restaurants packed with dinner reservations as people returned to their favourite hangouts in droves.

Queues for the clubs in Trondheim were so long that several people fainted while waiting to get inside.

Police in the city reported a generally good-natured atmosphere, with revellers singing the national anthem in the streets.