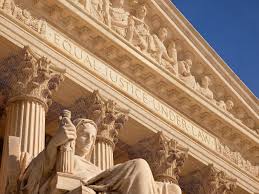 The judges failed to recuse themselves from 685 lawsuits from 2010 to 2018 involving firms in which they or their family held shares, a Wall Street Journal investigation found

More than 130 federal judges have violated U.S. law and judicial ethics by overseeing court cases involving companies in which they or their family owned stock.

A Wall Street Journal investigation found that judges have improperly failed to disqualify themselves from 685 court cases around the nation since 2010. The jurists were appointed by nearly every president from Lyndon Johnson to Donald Trump.

About two-thirds of federal district judges disclosed holdings of individual stocks, and nearly one of every five who did heard at least one case involving those stocks.

Alerted to the violations by the Journal, 56 of the judges have directed court clerks to notify parties in 329 lawsuits that they should have recused themselves. That means new judges might be assigned, potentially upending rulings.

When judges participated in such cases, about two-thirds of their rulings on motions that were contested came down in favor of their or their family’s financial interests.

In New York, Judge Edgardo Ramos handled a suit between an Exxon Mobil Corp. unit and TIG Insurance Co. over a pollution claim while owning between $15,001 and $50,000 of Exxon stock, according to his financial disclosure form. He accepted an arbitration panel’s opinion that TIG should pay Exxon $25 million and added $8 million of interest to the tab.

In Colorado, Judge Lewis Babcock oversaw a case involving a Comcast Corp. subsidiary, ruling in its favor, while he or his family held between $15,001 and $50,000 of Comcast stock.

At an Ohio-based appeals court, Judge Julia Smith Gibbons wrote an opinion that favored Ford Motor Co. in a trademark dispute while her husband held stock in the auto maker. After she and the others on the three-judge appellate panel heard arguments but before they ruled, her husband’s financial adviser bought two chunks of Ford stock, each valued at up to $15,000, for his retirement account, according to her disclosure form.

The hundreds of recusal violations found by the Journal breach a bedrock principle of American jurisprudence: No one should be a judge of his or her own cause. Congress first laid out that principle in 1792 to guarantee litigants an impartial judge and reassure the public that courts could be trusted.

Judge Ramos, who oversaw the Exxon case, was unaware of his violation, said an official of the New York federal court, because his “recusal list”—a tally judges keep of parties they shouldn’t have in their courtrooms—listed only parent Exxon Mobil Corp. and not the unit, whose name includes the additional word “oil.” The official said the court conflict-screening software relied on exact matches.

The unit had informed the court at the outset of the case that it was a subsidiary of Exxon Mobil so Judge Ramos could “evaluate possible disqualification or recusal,” a court filing shows.

After the Journal contacted Judge Ramos, who was named to the court by former President Barack Obama, the court’s clerk notified the parties of his stockholding. TIG attorneys asked the court to set aside his ruling and send the case to a new judge because of “the inevitable appearance of partiality.” Exxon opposed assigning a new judge, calling that a “manifest unfairness, gross inefficiency, and waste of judicial resources.” An appellate court has put a hearing on hold until the district court decides what to do.

In the Comcast case, a Colorado couple asked Judge Babcock to issue an order blocking Comcast from accessing their property to install fiber-optic cable. Representing themselves in court, Andrew O’Connor and Mary Henry accused Comcast workers of bullying them, scaring their 10-year-old daughter and injuring their dog, Einstein, allegations the company denied. Judge Babcock, who was appointed to the court by former President Ronald Reagan, ruled the couple had “continually blocked Comcast’s access to the easement.” He sent the case back to state court, as Comcast wanted.

“I dropped the ball,” Judge Babcock said when asked about the recusal violation. He blamed flawed internal procedures. “Thank you for helping me stay on my toes the way I’m supposed to,” he said. A Comcast spokeswoman declined to comment.

Mr. O’Connor, who settled his case in state court, said, “If you are a federal judge, you should not be holding individual stocks.”

Judge Gibbons from the Ford trademark case, appointed to the appeals court by former President George W. Bush, said she had mistakenly believed holdings in her husband’s retirement account didn’t require her recusal. She later directed the clerk of the Sixth U.S. Circuit Court of Appeals to notify the parties of the violation and said that her husband has since told his financial adviser not to buy individual stocks.

“I regret my misunderstanding, but I assure you it was an honest one,” she said.

A spokesman for Ford said: “A fair and impartial judiciary is critical to the integrity of our legal system. In this case, the violation of Ford’s trademarks was clear.”

“I dropped the ball. Thank you for helping me stay on my toes the way I’m supposed to.”— Judge Lewis Babcock, when asked about his violations

Nothing bars judges from owning stocks, but federal law since 1974 has prohibited judges from hearing cases that involve a party in which they, their spouses or their minor children have a “legal or equitable interest, however small.” That law and the Judicial Conference of the U.S., which is the federal courts’ policy-making body, require judges to avoid even the appearance of a conflict. Although most lawsuits don’t directly affect a company’s stock price, the Supreme Court in 1988 said the law’s purpose is to promote confidence in the judiciary.

Conflict-of-interest rules are common for state and federal employees as well as for lawyers, journalists and corporate executives. U.S. government workers may not participate “personally and substantially” in matters in which they have a financial interest.

The Journal reviewed financial disclosure forms filed annually for 2010 through 2018 by roughly 700 federal judges who reported holding individual stocks of large companies, and then compared those holdings to tens of thousands of court dockets in civil cases. The same conflict rules apply to criminal cases, but large companies are rarely charged, and the Journal found no instances of judges holding shares of corporate criminal defendants in their courts.

It found that 129 federal district judges and two federal appellate judges had at least one case in which a stock they or their family owned was a plaintiff or defendant.

The Journal found 61 judges or their families not only holding stocks in companies that were plaintiffs or defendants in the judges’ courts but also trading the stocks during cases.

Judges offered a variety of explanations for the violations. Some blamed court clerks. Some said their recusal lists had misspellings that foiled the conflict-screening software. Some pointed to trades that resulted in losses. Others said they had only nominal roles, such as confirming settlements or transferring cases to other courts, though there is no legal exemption for such work.

The ethics code for federal judges “requires recusal when a judge has a financial conflict, regardless of the substance of the judge’s actual involvement in the case,” the Judicial Conference’s Committee on Codes of Conduct wrote in a letter to a judge this month.

Some blamed court clerks. Some said their recusal lists had misspellings. Some pointed to trades that resulted in losses.

It said the federal judiciary “takes very seriously its obligations to preclude any financial conflicts of interest” and has taken steps, such as conflict-screening software and ethics training, to prevent violations. “We have in place a number of safeguards and are looking for ways to improve,” the office said.

They have soup-to-nuts control over all elements of their courtrooms, from pretrial process and trial to criminal pleas, judgments and sentencing. Judges have wide latitude for fact findings and evidentiary rulings, most of which can be overturned only for abuse of discretion, a high hurdle.

Judges are informed if anyone requests to see their disclosures, creating a disincentive for lawyers who might fear annoying judges in whose courtrooms they frequently appear.

Judges rarely make public the lists of companies on whose cases they shouldn’t work. When judges disqualify themselves from cases, they typically don’t disclose details. No judges in modern times have been removed from the federal bench solely for having a financial interest in a plaintiff or defendant that appeared in their courtroom.