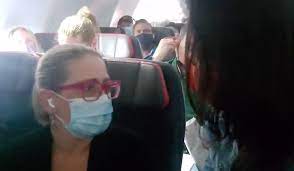 Radical activists are carrying out a deliberate harrassment and intimidation campaign against Kyrsten Sinema due to the Arizona Senator’s opposition of left-wing agenda items in the “infrastructure” and budget bills.

On Monday, following the infamous and potentially illegal ‘bathroom insurrection’ at Arizona State University where Sinema teaches, the senator was stalked onto a commercial airline and personally berated. Watch:

The activist greeted the senator while she tried to read, then asked her about the ‘pathway to citizenship.’ provision of the budget that Democrats want to pass via reconciliation, even though the Senate parliamentarian has scored this legislative method as unconstitutional.

“We have been waiting for this for too long, and I just need to know if you can come in” and meet with her, the activist asked.

Sinema refused to acknowledge the activist and continued to read. She then slowly shook her head ‘no’ as if to indicate that she was not going to talk under the inappropriate circumstances.

“My dad passed away last year,” the activist said, which occasioned a look of sympathy from Sinema, although she continued displaying that she was not willing to talk on the flight.

“I don’t want to disturb you, but at the same time, I just want to see if I can get a commitment from you,” she pressed.

“This is my life and the life of millions, I just need to hear from you,” she continued. “Can we get a commitment from you to get a pathway to citizenship through the process of reconcilation to protect me and millions like me?”