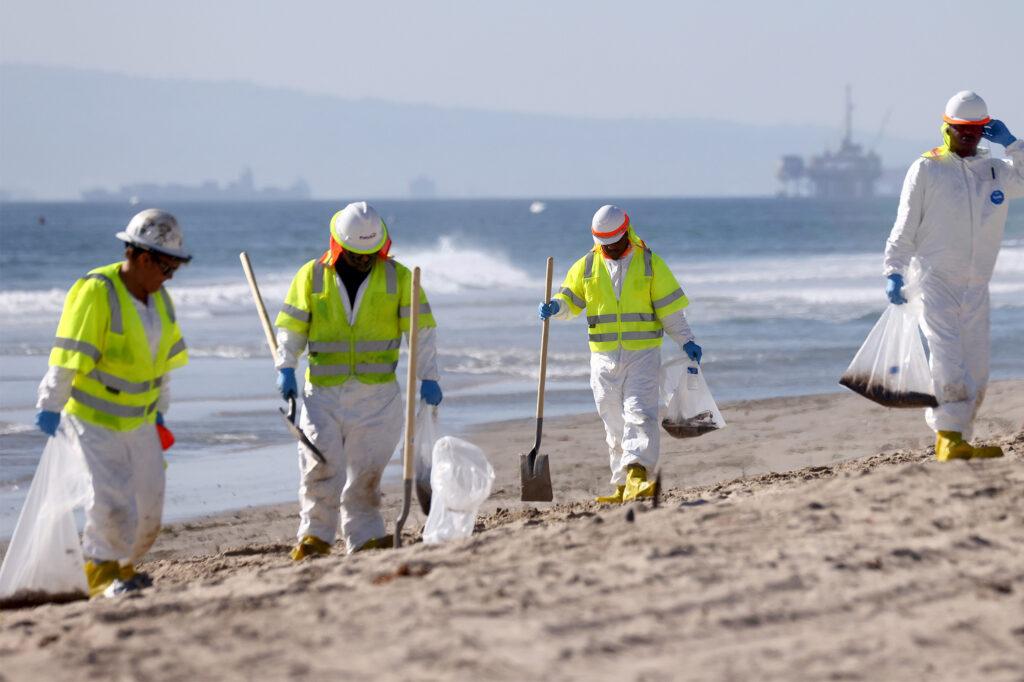 LONG BEACH, Calif. — Evidence emerged Tuesday that a ship’s anchor snagged and dragged an underwater pipeline that ruptured and spilled tens of thousands of gallons of crude oil off Southern California, an accident the Coast Guard acknowledged it did not investigate for nearly 10 hours after the first call came in about a possible leak.

The pipe was split open and a nearly mile-long section apparently pulled along the ocean floor, possibly by “an anchor that hooked the pipeline, causing a partial tear,” federal transportation investigators said.

“The pipeline has essentially been pulled like a bow string,” said Martyn Willsher, CEO of Amplify Energy Corp., which operates the pipeline. “At its widest point, it is 105 feet (32 meters) away from where it was.”

Huge cargo ships regularly cross above the pipeline as they head into the massive Los Angeles-Long Beach port complex. They are given coordinates where they are to anchor until unloading.

Even when anchored, cargo ships continually move from shifting winds and tides. If a ship fails to properly set its anchor in the ocean floor, those forces of nature come into play and can push the ship and drag the anchor along the bottom, potentially catching anything in its way, said Steven Browne, a professor of marine transportation at California State University Maritime Academy.

Anchors on large ships can weigh 10 tons or more and are attached to hundreds of feet of thick steel chains. “Whatever the anchor gets fouled on will come along with the ship,” Browne said.

The spill sent up to 126,000 gallons (572,807 liters) of heavy crude into the ocean off Huntington Beach. It then washed onto miles of beaches and a protected marshland.

The beaches could remain closed for weeks or longer, a major hit to the local economy. Coastal fisheries in the area are closed to commercial and recreational fishing. On shore, animals rescuers have been pleasantly surprised to find few birds covered in oil.

The time of the spill was still unclear Tuesday, and there was no indication whether investigators suspect that a particular ship was involved.

Democratic Congresswoman Katie Porter, a Democrat who chairs the oversight and investigations subcommittee of the House Natural Resources Committee, said the panel would investigate the incident.

Coast Guard officials defended their decision to wait until sunrise Saturday to investigate a possible spill first reported by a commercial ship at 8:22 p.m. Friday near a cluster of boats that were anchored off Huntington Beach.

That sighting was supported by a report to the National Response Center, a hazardous spill hotline staffed by the Coast Guard, at 2:06 a.m. Saturday from the National Oceanic and Atmospheric Administration, which said satellite images showed the strong likelihood of an oil slick.

Residents in nearby Newport Beach had also complained Friday evening about a strong stench of petroleum, and police put out a notice to the public about it.

The Coast Guard was alerted to a sheen on the water by a “good Samaritan” but did not have enough corroborating evidence and was hindered by darkness and a lack of technology to seek out the spill, Coast Guard Rear Adm. Brian Penoyer told The Associated Press.

He said the Coast Guard put out a broadcast to the many cargo and tanker ships anchored off the Los Angeles and Long Beach ports, along with oil rigs, seeking more information but did not receive any response.

Coast Guard Capt. Rebecca Ore later disputed that account. She said the Coast Guard did not broadcast any information to ships or oil platforms, and Penoyer later said he needed to check his facts.

Penoyer said it was fairly common to get reports of oil sheens in a major seaport.

“In hindsight, it seems obvious, but they didn’t know that at that time,” Penoyer said.

Federal pipeline safety investigators put the time of the spill at 2:30 a.m. Saturday, which is when they said an alarm sounded in the control room of an Amplify-owned offshore oil rig. It was an alert that pressure had dropped in the pipeline, indicating a possible leak.