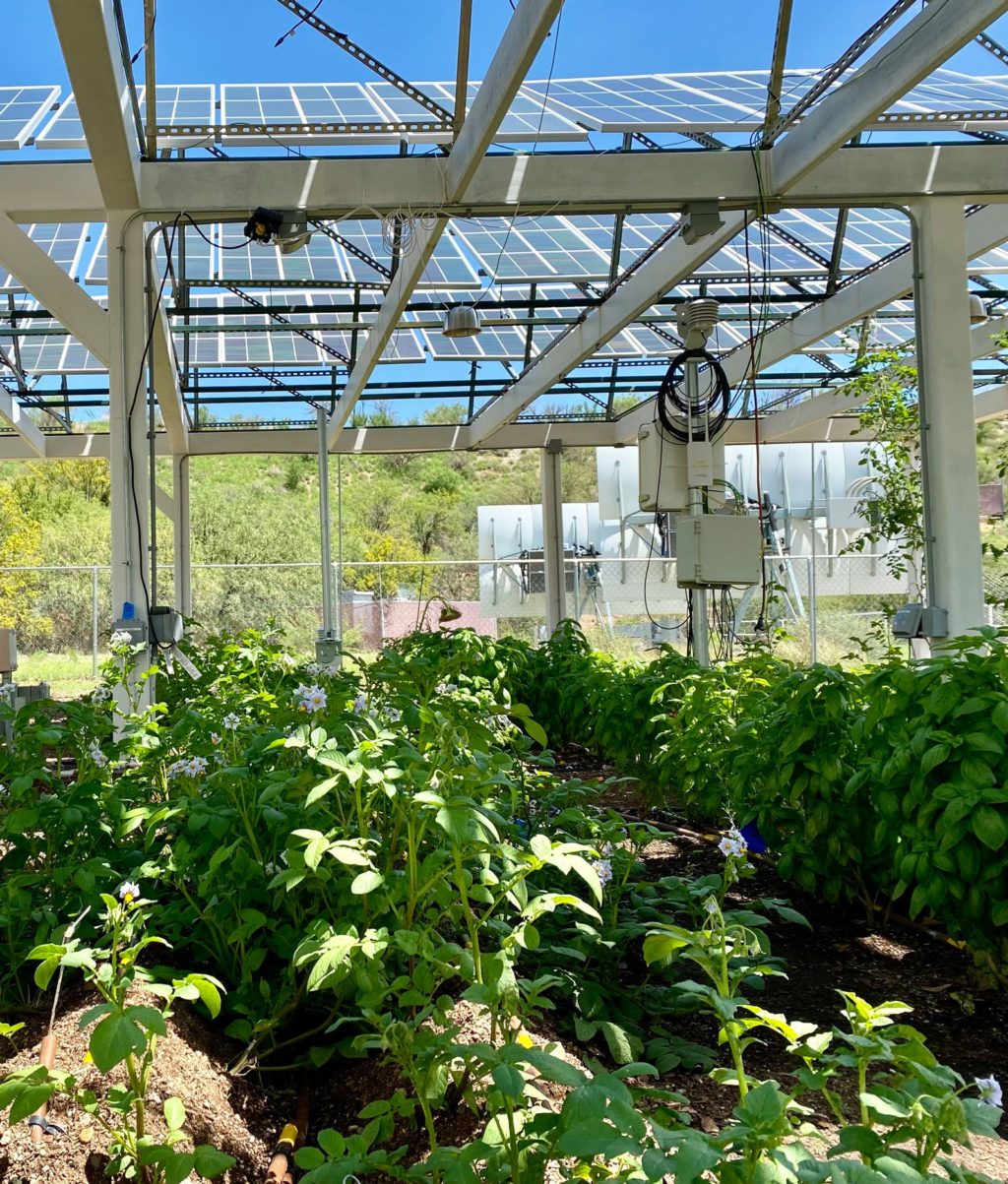 IN JACK’S SOLAR Garden in Boulder County, Colorado, owner Byron Kominek has covered 4 of his 24 acres with solar panels. The farm is growing a huge array of crops underneath them—carrots, kale, tomatoes, garlic, beets, radishes, lettuce, and more. It’s also been generating enough electricity to power 300 homes. “We decided to go about this in terms of needing to figure out how to make more money for land that we thought should be doing more,” Kominek says.

Rooftops are so 2020. If humanity’s going to stave off the worst of climate change, people will need to get creative about where they put solar panels. Now scientists are thinking about how to cover canals with them, reducing evaporation while generating power. Airports are filling up their open space with sun-eaters. And space doesn’t get much more open than on a farm: Why not stick a solar array in a field and plant crops underneath? It’s a new scientific (and literal) field known as agrivoltaics—agriculture plus photovoltaics—and it’s not as counterintuitive as it might seem.

Yes, plants need sunlight, but some need less than others, and indeed get stressed by too many photons. Shading those crops means they will require less water, which rapidly evaporates in an open field. Plus, plants “sweat,” which cools the panels overhead and boosts their efficiency.

“It is a rare win-win-win,” says Greg Barron-Gafford, an earth system scientist at University of Arizona who’s studying agrivoltaics. “By growing these crops in the shade of solar arrays, we reduce the amount of that intense sunlight that bakes off the water and stresses out the plant.” Barron-Gafford is among the recipients of a new $10 million grant from the USDA’s National Institute of Food and Agriculture to research agrivoltaics for different regions, crops, and climates.

Barron-Gafford has been running experiments to quantify several variables—like growth, water use, and energy production—to determine which crops might benefit most. For instance, he’s grown salsa ingredients—cilantro, peppers, and tomatoes—and found that they grow just as well, if not better, under solar panels than in the open. They also only use half the water. (“Think if you spilled your water bottle in the shade versus the sun,” says Barron-Gafford.) He also found that the panels significantly reduce air temperatures, which would benefit farmworkers tending to the plants. His work suggests that the panels might act as a protective bubble to shield crops from extreme heat associated with climate change, which overwhelms crops and decreases their yields.

Heavy precipitation that can damage crops is also on the rise, since a warmer atmosphere holds more moisture. “In times when there is extreme heat or extreme precipitation, by protecting plants in this manner, it can actually benefit them,” says Madhu Khanna, an economist at the University of Illinois, Urbana-Champaign, who also won funding from the USDA’s new agrivoltaics grant. “So that’s another factor that we want to look at.”

Khanna will be studying what the ideal solar array might be for a particular crop, for instance, if it needs bigger or smaller gaps between panels to let sunlight pass through. Height, too, is an issue: Corn and wheat would need taller panels, while shrubby soybeans would be fine with a more squat variety.

Thanks to those gaps, crops grown under solar panels aren’t bathed in darkness. But, generally speaking, the light is more diffuse, meaning it’s bouncing off of surfaces before striking the plants. This replicates a natural forest environment, in which all plants, save for the tallest trees, hang out in the shade, soaking up any sunbeams that break through.

Barron-Gafford has found that a forestlike shading under solar panels elicits a physiological response from plants. To collect more light, their leaves grow bigger than they would if planted in an open field. He’s seen this happen in basil, which would increase that crop’s yield. Barron-Gafford has also found that the pepper Capsicum annuum, which grows in the shade of trees in the wild, produces three times as much fruit in an agrivoltaic system. Tomato plants also grow more fruit. This is likely due to the plants being less stressed by the constant bombardment of sunlight, to which they’re not evolutionarily adapted.

But every crop is going to be different, so scientists have to test each to see how they react to shade. “For example, we probably wouldn’t recommend that somebody plant summer squash directly in the deepest shade, directly under a panel,” says Mark Uchanski, a horticultural scientist at Colorado State University who’s studying agrivoltaics and tested that exact scenario. “The better location for that might be further out toward the edges where it’s more likely to get a little bit more sun, because we did see a yield decrease in that case.”

While setting up the panels entails some up-front costs, they might actually make farmers some money, as Kominek told Grist in this 2020 story before his panels were in place. They’d produce energy to run the farm, and the farmer can sell any surplus back to a utility. And since some plants—like those salsa ingredients in Barron-Gafford’s experiments—will use less water, that can reduce irrigation expenses. “If we can actually allow farmers to diversify their production and get more out of the same land, then that can benefit them,” says Khanna. “Having crops and solar panels is more beneficial for the environment than solar panels alone.”

This kind of setup also cools the solar panels in two ways: Water evaporating from the soil rises up towards the panels, and plants release their own water. This is dandy for the panels’ efficiency, because they actually perform worse when they get too hot. They generate an electric current when the sun’s photons knock electrons out of atoms, but if they overheat, the electrons get overexcited and don’t generate as much electricity when they’re dislodged.

And as with putting solar panels above canals, using farmland pulls off the neat trick of not taking up any extra land. To deploy a traditional solar array, you’d need to clear space first. But canals and agricultural fields are already in use. “It’s this big macro-trigger to kind of get people to the table and think about: What does rural economic development look like, and what’s the future of agriculture?” says Andrea Gerlak, a social scientist at the University of Arizona, who’s working with Barron-Gafford on the deployment of agrivoltaics. “If it allows smart agriculture, sustainable agriculture, and it uses less water, it’s this big trigger to get people talking.”

But agrivoltaics won’t work for every farm. Solar panels remain a significant investment, especially on a field-sized scale. Maneuvering around them with heavy harvesting equipment will also be a challenge, so Khanna says the arrays should be designed as flexible systems. “The idea would be that you have these panels that are not just going to be fixed at a given angle and stationary,” says Khanna. “They’ll actually be able to rotate and become vertical, and let the equipment pass through.”

Kominek adds that the United States is seeing a massive transfer of farmland from an older generation to a younger one, which has to decide what to do with their inheritance. Faced with the difficulties of drought and heat, the temptation might be to say, “To hell with crops,” and cover a farm entirely with solar panels. But he and Barron-Gafford don’t think it has to be an either-or proposition.

“The question for policymakers and landowners is, are we going to be taking out a lot of arable land—land where we could have chickens, cows, vegetables, perennials, and other things—and just putting in solar panels and having weeds grow underneath them?” Kominek asks. “Or are we going to create regulations that help to keep that soil active, to help it keep doing productive things, like it has been doing over the previous decades or centuries?”

Barron-Gafford also points out that agrivoltaics need not be limited to the kinds of crops people eat. A farmer might let native grasses grow wild under the panels, providing food for livestock, which would also benefit from the shade. Or they might promote the growth of plants for native pollinators like bees. With the right management, that land could pull double duty as a synthetic forest—just because it’s shaded, doesn’t mean life can’t flourish underneath.

“I think everything likes a little bit of shade,” says Kominek. “There’s quite a variety of crops that enjoy it. And when it’s 100 degrees outside, I enjoy the shade.”