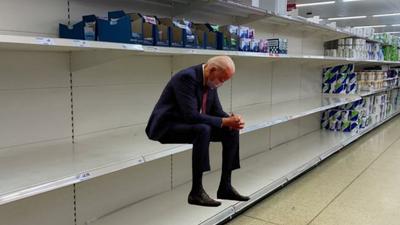 In fact, only 27 percent said they were “very confident” Biden was up to the job of being president, while 14 percent said “somewhat confident.”

Basically, only 41 percent of voters believe Biden has what it takes mentally and physically to be president.

Rasmussen also asked, “Is Joe Biden doing the job of president, or are others making decisions behind the scenes?”

Have we ever before lived in a country where 58 percent said the president is not mentally or physically fit to be president?

And those 58 percent are correct. There’s simply no question Biden is unfit to be president. We know this because his handlers keep him in hiding.

One of the basic rules of politics is that you put an end to negative speculation by meeting it head-on. If the criticism says you can’t or won’t or are incapable of doing that, you go out and show the world you are doing that.

One example occurred when former President Trump was accused of cowering in the White House bunker during the Black Lives Matter riots. A few days later, he walked across the street from the White House and held up a Bible at a local church vandalized by these terrorists.

That’s Politics 101. You assuage people’s fears by going out and showing the criticism is invalid.

If people question the president’s health, you get him out there to prove he’s robust.

If people question the president’s ability to understand the common man, you get him out there talking to everyday people.

This is the long way of saying that if Biden were indeed physically and mentally up to the job, he would be out and about right now proving it.

Instead, because he is indeed mentally and physically unfit, he remains in hiding from the public. And when he does come out, it’s in a totally managed and controlled environment, like his upcoming CNNLOL town hall, where he will be protected, get the questions in advance, and not face a situation that mentally or physically taxes him.

Ironically, if Biden did know what was going on around him, he would take a look at his public opinion polls and be furious at those making all these terrible decisions in his name.