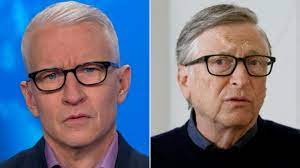 Anderson Cooper, just like the rest of his colleagues at CNN, has zero credibility when it comes to reporting the news. He is not a journalist, so much as an opinionist.

Cooper is merely a talkinghead for the liberal agenda and the Biden administration.

Social media exploded after a clip of CNN anchor Anderson Cooper appearing to suggest that the vaccine-hesitant could be denied Social Security was posted on Christmas Eve and drew a fierce response from Twitter users worried about the lengths to which the government might go to enforce compliance.

But don’t be mad. He didn’t really mean what he said as an endorsement. Outlets like AP have jumped to lib-splain his question as “only a question.” Thanks for clearing that up, guys!

Since When Did Rich College Dropout Computer Nerds Dictate Healthcare?