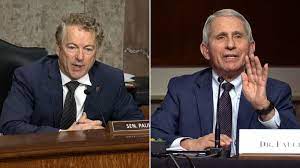 The highly unpopular Biden regime medical advisor Anthony Fauci scrambled to explain himself after Sen. Rand Paul confronted him over using his “$420,000 salary to attack scientists that disagree” with him, as revealed in a recent email exchange that was released to the public.

Anthony Fauci, the highly unpopular Biden regime medical advisor, was grilled once again by Paul over newly released emails purportedly showing that he used his government position to smear three accomplished epidemiologists who disagreed with him.

“The idea that a government official like yourself would claim unilaterally to represent science, that any criticism of you would be considered a criticism of science itself is quite dangerous,” Senator Paul told Fauci.

Dr. Paul said during the hearing:

“Central planning, whether it be of the economy or of science, is risky because of the fallibility of the planner. It would not be so catastrophic if the planner where simply one physician in Peoria, then the mistakes would only affect those patients who chose that physician, but when the planner is a government doctor, who rules by mandate, the errors are compounded and become much more harmful.

“A planner who believes he is “the science,” leads to an arrogance that justifies, in his mind, using government resources to smear and destroy the reputations of other scientists who disagree with him.”

In a recently released email exchange with Dr. Collins, Dr. Fauci conspired, to create “a quick and devastating published takedown of three prominent epidemiologists from Harvard, Oxford, Stanford and label them, “fringe.” Instead of engaging with the epidemiologists on merits, Dr. Fauci and Dr. Collins sought to smear and discredit any questions, opinions, and concerns they had. This is not only antithetical to the scientific method; it is the epitome of cheap politics that Dr. Fauci continues to prioritize over any questions surrounding COVID-19.