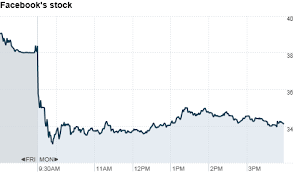 Facebook loses users for the first time EVER: Shares plummet 20%, wiping $200BN off value of parent-firm Meta after it revealed 500,000 fewer daily log-ins and declining profits – biggest one-day decline for a stock in U.S. history

Facebook lost daily users for the first time in its 18-year history which CEO Mark Zuckerberg believes was caused by the TikTok boom.

‘People have a lot of choices for how they want to spend their time, and apps like TikTok are growing very quickly,’ Zuckerberg said during an earnings call Wednesday, according to the Washington Post.

Facebook reported a drop of nearly 500,000 in daily logins during the last three months of 2021. Zuckerberg reiterated that Meta – the company that owns Facebook, Instagram and WhatsApp – is pushing hard to develop its short-form video Reels in an effort to compete with TikTok.

‘This is why our focus on Reels is so important over the long term,’ he added.

Facebook, which now only has 1.93 billion users logging in each day, also saw its shares plunged more than 20 percent in extended trading on Wednesday after unexpectedly heavy spending on its Metaverse project led to a rare decline in its fourth quarter profit.

The company heavily invested in its Reality Labs segment – which includes its virtual reality headsets and augmented reality technology – during the final quarter of 2021, accounting for much of the profit decline.

Zuckerberg, who is worth approximately $107 billion, held more than 398 million shares of Meta at the end of 2020, according to Investopedia. Based on his reported holdings, the CEO personally experienced a more than $29 billion loss when the company’s stock fell Wednesday.

Analysts allege investors had expected signs of declining users growth but were ‘taken aback’ by the amount of ad dollars the company lost in wake of TikTok’s growth.

TikTok is dominating the short-form user-generated video market, despite Meta offering its own Reels product on Instagram.

Data indicates the platform lost consumers to TikTok and  saw lover revenue from ads destined for its short-form videos, according to Bloomberg.

The figures, however, should not have blindsided investors as there have been repeated signs that Meta was trying to compete with the new video format.

Last summer, Instagram chief Adam Mosseri moved the platform’s focus to embrace videos instead of its usual emphasis on photo-sharing, a move Mosseri said was inspired by TikTok’s rising popularity.

Zuckerberg emphasized the move during Wednesday’s earnings call, reiterating that Instagram would continue to focus on Reels.

The CEO has also been adamant that Meta’s long-term success is dependent on his Metaverse vision.

However, figures reveal the company has lost over $20 billion on Metaverse projects over the last three years.

The data also revealed that consumers are being less interested in the Facebook platform, specifically in Africa and Latin America, where the loss of daily users was greatest. Some analysts allege this shows the product may be globally saturated.

Meta’s fourth quarter earnings reports also indicate the platform’s user growth has stalled in the US and Europe, a trend witnessed over the last several years.