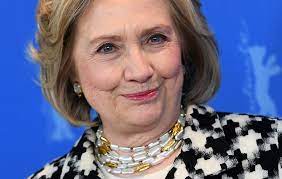 The mainstream media is under fire again for ignoring the bombshell claims Hillary Clinton’s campaign spied on Donald Trump while he was President – while they show no hesitation in heavy coverage of the discredited Steele dossier and allegations he was colluding with Russia,

DailyMail.com found no links or references to the latest revelations by Special Counsel John Durham in his probe into the origins of the Russia investigation on the New York Times, Washington Post, CNN, MSNBC, ABC, CBS.

The story has even been picked up global news organizations, including The Times of London, but has seen little in comparison to the wall-to-wall coverage of the so-called ‘dirty dossier’ that turned out to be Democrat-funded opposition research used as a basis for the FBI to surveil Trump campaign aide Carter Page.

The authenticity of the Steele dossier crumbled when Russian-born analyst Igor Y. Danchenko was arrested and indicted in November for lying about his contact with a Bill and Hillary Clinton crony, who supplied some of the information.

Even on Monday, days after the alleged scandal broke, CNN’s top story on its digital site was about pro-Trump lawyer John Eastman handing nearly 8,000 documents over to the House committee investigating the Capitol riot.

At the time of Danchenko’s arrest, it appeared that the same outlets giving the dossier oxygen before it could be further verified were poised to re-examine their coverage.  However since the weekend they have also been silent about Durham’s findings.

A 2020 interview Trump sat for with CBS News host Lesley Stahl resurfaced amid the fallout, in which the veteran journalist dismissed claims that political opponents spied on Trump’s campaign.

Trump jumped on the lack of stories published in outlets over the weekend, said it is proof the media is corrupt and claimed ‘all hell would break loose’ if Republicans faced the same accusations. 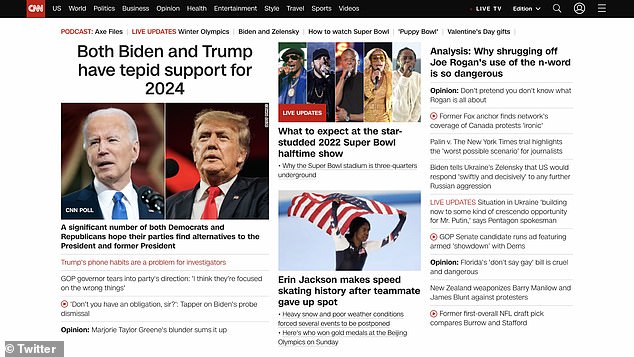 No mention of Durham can be seen in screenshots of CNN, MSNBC, The New York Times and Washington Post that were posted on Twitter by Rep. Steve Scalise on Sunday. DailyMail.com found no links or references to the latest revelations by Special Counsel John Durham in his probe into the origins of the Russia investigation on the New York Times, Washington Post, CNN, MSNBC, ABC, CBS

He added that the lack of coverage on the matter on more liberal-leaning networks was a ‘scandal’ itself, in contrast with the steady stream of pundits and Republican officials weighing in on right-wing outlets.

‘Can you imagine that, what should be the biggest story of our time, bigger than Watergate, is getting absolutely no mention, ZERO, in the New York Times, Washington Post, ABC Fake News, NBC Fake News, CBS Fake News, ratings-dead CNN, and MSDNC,’ Trump said through his Save America PAC.

‘This in itself is a scandal, the fact that a story so big, so powerful, and so important for the future of our Nation is getting zero coverage from LameStream, is being talked about all over the world.

Just like they wouldn’t talk about the many Biden corruption scandals prior to the Election, (or for that matter now!), they won’t talk about this, which is potentially even bigger. It shows how totally corrupt and shameless the media is.’

The Democrat-funded opposition research that suggested Trump was in the Kremlin’s pocket was found to have been used as the basis for the FBI to surveil ex-Trump campaign aide Carter Page, before key claims in it were debunked and one of its key sources, a Russian analyst named Igor Danchenko, was charged with lying to that same agency.

Meanwhile, conservative pundits and current and former Republican officials have come down on the Clinton team, some even agreeing with Trump’s accusation that the Democrat’s actions amounted to ‘treason.’

Former Deputy National Security Adviser K.T. McFarland said the reason mainstream media outlets were ignoring the story was because they were complicit in conjuring a false narrative around the Trump administration, which she was part of for four months in 2017.