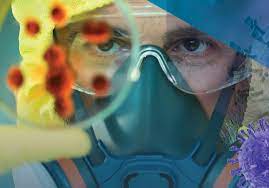 Metabiota was started with help from U.S. President Joe Biden’s son Hunter Biden and his investment firm Rosemont Seneca Technology Partners (RSTP), which he founded alongside John Kerry’s stepson in 2009

During a Monday press conference, the Russian Army’s Chief of the Radiation, Chemical and Biological Defense Forces, Igor Kirillov, mentioned a private American company called Black & Veatch as being partnered with the Pentagon on secret Ukrainian biolab projects.

“A firm affiliated to the Defense Department, (Black and Veatch above all others) are involved in the implementation of the projects,” he said.https://www.youtube.com/embed/3_q0qgqCLK0?feature=oembed

In 2015, an Infowars article titled, “Why Does Pentagon Need Laboratories In Ukraine?” touched on Black & Veatch’s involvement in the biolabs.

Biolabs operated under the Pentagon’s Defence Threat Reduction Agency (DTRA) program from 2008 to 2017 were constructed and operated by Black & Veatch following an estimated $215.6 million of work.

Prior to 1996, the DTRA was perhaps more accurately referred to as Defense Special Weapons Agency.

The US corporation brags of having worked with the Pentagon since 2003.

In 2014, a firm called Metabiota, which specializes in detecting, tracking, and analyzing potential disease outbreaks, signed an $18.4 million federal contract as a subcontractor for Black & Veatch in Georgia and Ukraine.

The pair even share an office in Kiev, according to a job advertisement posted by Black & Veatch.

In 2015, amid these clandestine projects, Google-funded Metabiota to the tune of $1 million.

These well-connected “corporations” have more interesting ties as well.

Metabiota was started with help from U.S. President Joe Biden’s son Hunter Biden and his investment firm Rosemont Seneca Technology Partners (RSTP), which he founded alongside John Kerry’s stepson in 2009.

The Hunter Biden firm was the center of a massive scandal in 2020 after it was revealed the wife of the former mayor of Moscow mysteriously wired $3.5 million to the “investment” group.

In June of 2021, Natalie Winters of The National Pulse detailed the Biden firm’s funding of the San Francisco-based Metabiota.

A June 2015 financial report shows RSTP gave Metabiota $30 million to help “protect the world from the spread of epidemics.”

One year before RSTP began funding Metabiota, the disease tracking company partnered with the now-infamous EcoHealth Alliance (EHA) under the USAID’s Predict Project.

In 2014, Metabiota, EHA and the Wuhan Institute of Virology were all named as researchers in a study on infectious diseases deriving from Chinese bats.

EHA is the group Dr. Anthony Fauci used to funnel money to the Wuhan lab after the Obama administration put a halt to dangerous gain-of-function research in 2014.

In 2021, thanks to Joe Biden, the USAID once again sought the help of EcoHealth Alliance and Metabiota for a taxpayer-funded investigation into what may cause the next pandemic.

For those wondering why the lab leak theory and Hunter Biden’s ties to the Wuhan lab were covered up by the media, it could be the fact that Google has been funding EcoHealth Alliance for over a decade.

Google also has its ties with Metabiota, via the Central Intelligence Agency.

Besides Hunter Biden, Google and the Pentagon, Metabiota is in a working relationship with known CIA front In-Q-Tel.

Created by the CIA in 1999 as “the first government-sponsored venture capital firm,” In-Q-Tel has been controversial since its inception.

Google was also spawned by the CIA, via Stanford University, and has carried out several contracts with the agency throughout its existence.

In 2004, Google bought the firm Keyhole, which had originally been funded by In-Q-Tel.

The 2019 Greg Reese special report posted below highlights the In-Q-Tel ties to Facebook, another outlet with reason to censor information on this topic.https://api.banned.video/embed/5c8eb06096f802002664dc9d

Metabiota’s founder, “virus hunter” Nathan Wolfe, also sits on the board of Peter Daszak’s EcoHealth Alliance and is a member of DARPA’s Defense Science Research Council.

Wolfe’s projects have received funding from the NIH, the Bill & Melinda Gates Foundation and the National Geographic Society in addition to the previously detailed Google and DOD financing.

In 2012, Wolfe wrote a book titled, “The Viral Storm: The Dawn of a New Pandemic Age,” where he thanked friends including deceased pedophile Jeffrey Epstein and biotech venture capitalist Boris Nikolic.

Nikolic was named as the “successor executor” on Epstein’s will upon his death.

Uh, this is interesting. So in 2011 a virologist named Nathan Wolfe writes a book called

“The Viral Storm: The Dawn of a New Pandemic Age”

Of the ~16 friends Wolfe thanks for adding time/unique skills to this book we find:

Referred to by mainstream media as the “Indiana Jones” of virus hunting, Wolfe has been photographed hanging out with Ghislaine Maxwell on multiple occasions.

The Metabiota founder’s wife is a liberal playwright who incorporates left-wing activism into her shows and hosted an anti-Trump viewing on the night of the 2016 election with proceeds going to Planned Parenthood.

Wolfe is also one of World Economic Forum founder Klaus Schwab’s Young Global Leaders, a group of elite individuals placed into positions of power in order to enact the Great Reset agenda.