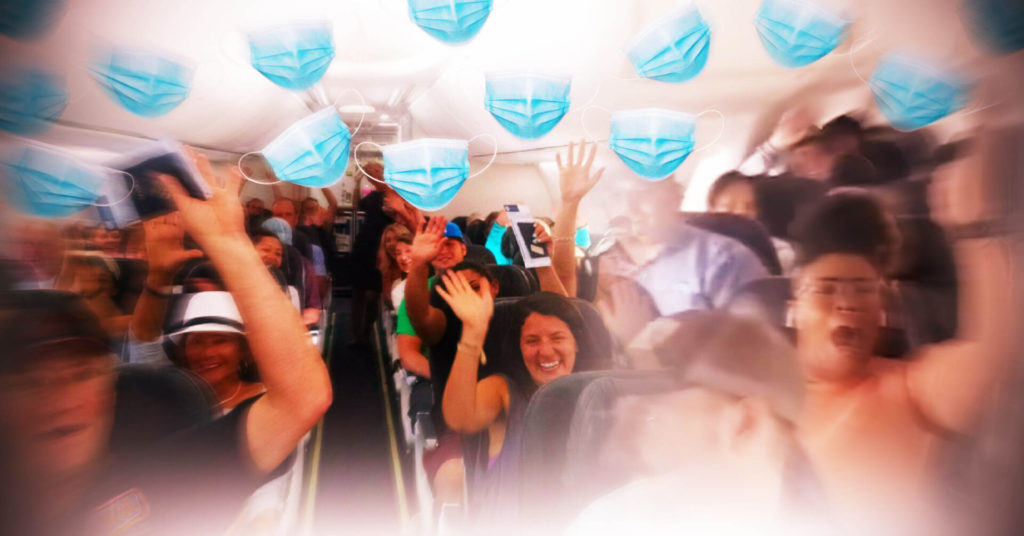 There’s finally something to celebrate in the not-so-friendly skies. Thanks to a lovely and patriotic 35-year-old Trump-appointed judge in Florida, nobody has to wear masks on airplanes anymore.

The BBC reported that U.S. District Judge Kathryn Kimball Mizelle ruled that the CDC exceeded its legal powers in issuing the mask mandate. So now, the TSA has said it would no longer enforce mask-wearing. And it looks like the Biden administration is not even going to bother asking for a stay on Judge Mizelle’s ruling in court. The DOJ is punting the whole issue to the CDC, who will probably just capitulate on the mandate soon.

The CDC had just last week decided to extend the mandate until the third of May before Judge Mizelle issued her ruling. The BBC explained further:

Judge Mizelle is based in Florida, but federal judges can issue rulings that block nationwide government policies.

Her order on Monday effectively removes the masking requirement in all airports, trains, taxis, and transit hubs.

It feels like that jubilant moment in the movie “Footloose,” when everybody kicked off their Sunday shoes.

And that was the “vibe” midair when customers and flight crews learned the mandate was finally over. Planes erupted in cheers when pilots got on the speaker and announced Biden’s tyrannical mandate was kaput.

This was yet another blow to the Biden Regime, who had a front-row seat to watch Americans hoot and holler that another one of Joe’s unconstitutional mandates was shot down.

Needless to say, liberals are not handling the news well.

It’s interesting because it wasn’t so long ago that these same liberals were applauding “activist judges” who were stepping in every few minutes to rule against President Trump.

Now that it’s happening to them, they’re freaking out and crying “foul.”

Thank you, Judge Mizelle, for giving decent, hardworking Americans a slice of freedom back and making liberals cry again.