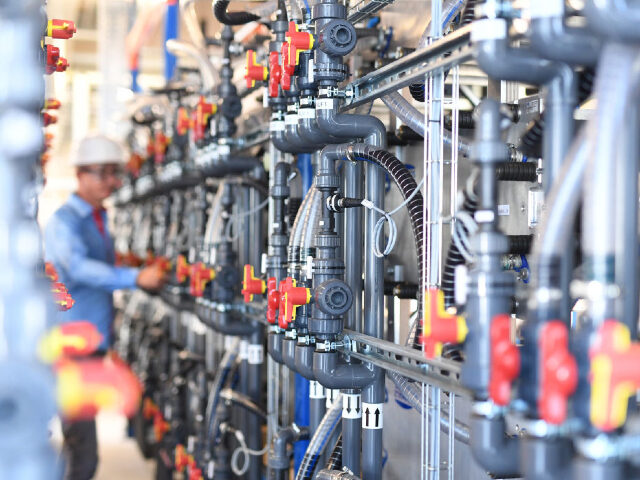 An American company called UniEnergy developed revolutionary battery technology that could theoretically allow a house to be powered by solar energy.

The company that made this breakthrough ten years ago is dead and gone because the U.S. Department of Energy (DOE) inexplicably gave its tech to China while preventing American companies from manufacturing it.

The astounding saga of UniEnergy and its vanadium redox flow batteries was told by National Public Radio (NPR) last week. The story began with government researchers developing a mixture of fluids that could store almost twice as much energy as existing battery technology, with very little degradation over long periods of time.

This was a crucial attribute for next-generation battery technology since the high cost of replacing degraded batteries is a major hurdle to the widespread adoption of large battery-powered equipment like electric vehicles. High-capacity and durable batteries, in turn, are essential to solar power designs because power must be stored to cover periods when the solar panels are not receiving enough sunlight.

With six years of effort and $15 million in U.S. taxpayer funding, researchers created a high-powered battery using vanadium that could last for up to 30 years. The lead scientist on the project, Gary Yang, secured a license from DOE to manufacture the batteries in 2012 and established UniEnergy Technologies.

Yang said he had trouble lining up American investors for his battery project – but Chinese money came on board thanks to businessman Yanhi Liu and his company, Dalian Rongke Power Co. Ltd.

The next part of the story should be drearily familiar to any student of Chinese technology theft: Rongke Power at first provided money for the battery project, then began handling some of the manufacturing, and soon was doing nearly all of the manufacturing. In 2019, UniEnergy told its engineers they would have to start living and working in China for four months out of each year. UniEnergy was no longer making enough batteries at its U.S. facilities to meet the terms of its DOE license.

In 2021, Yang decided to cut American workers completely out of the equation by transferring his license to Netherlands-based Vanadis Power, which had a long-term plan to shift some manufacturing from China to Germany, and then eventually back to the United States. Vanadis executives said the German stage of this plan had to come first due to European Union (EU) manufacturing requirements.

American requirements had vanished completely from the story by this point, but in July 2021, someone from UniEnergy finally got around to telling DOE that the battery developed with American science and taxpayer funding would now belong to a Chinese company and its European partner.

NPR suspected no one bothered to tell the Biden DOE that Vanadis was not an American company and there was no evidence DOE did any diligence on the matter, even though Vanadis’ own website said its super-batteries would be made in China – and China was making a huge deal about controlling this revolutionary technology, with demonstration projects and additional research funded by the Chinese Communist government.

DOE officials admitted to NPR that they rely on “good faith disclosures” from corporations instead of doing their own research. It took DOE a grand total of ninety minutes to sign off on the transfer of UniEnergy’s license to Vanadis.

The gigantic federal agency remained comatose until another American company, Forever Technology, tirelessly badgered it into noticing that China just walked away with yet another piece of valuable American-made “green” technology.

“How is it that the national lab did not require U.S. manufacturing? Not only is it a violation of the license, it’s a violation to our country,” asked exasperated Forever Energy CFO Joanne Skievaski.

Yang’s company UniEnergy is dead and gone, its employees laid off and its facilities shuttered. Forever Energy started trying to get the vanadium battery technology license over a year ago, while Communist China was merrily cranking out batteries using the technology our federal government helpfully gave it. Dalian Rongke has become the world’s top producer of vanadium redox flow batteries, and even gung-ho Skievaski admitted it would be difficult for any American company to catch up with China’s head start.

According to NPR, the DOE finally woke up from its decade-long regulatory nap and canceled Dalian Rongke’s license after NPR bombarded the agency with questions about it.

The Chinese are, to put it mildly, highly unlikely to stop making the batteries just because the U.S. government finally got around to terminating their license. In fact, China announced a new 800-megawatt battery farm using vanadium technology in May. The co-founder of Vanadis Power, Roelof Platenkamp, was quoted in Western media coverage of the announcement, explaining how the U.S.-taxpayer-funded technology given to China works.

The Register, a technology website, noted last week that while some vanadium redox flow batteries are made in the United States, there are currently no U.S. production sites for the specific technology described in the NPR article.

Incidentally, NPR made a point of mentioning that lead battery project scientist and UniEnergy founder Gary Yang was “born in China but is a U.S. citizen and got his Ph.D. at the University of Connecticut.”

The article does not explicitly accuse Yang of working on Beijing’s behalf all along, but it does pointedly marvel at some of the strange decisions he made along the way, and Skievaski dismissed Yang’s assertion that no American company had the infrastructure to build his batteries as “hogwash.” At one point, the article quotes Yang insisting that “he didn’t send the battery and his engineers abroad to help China.”