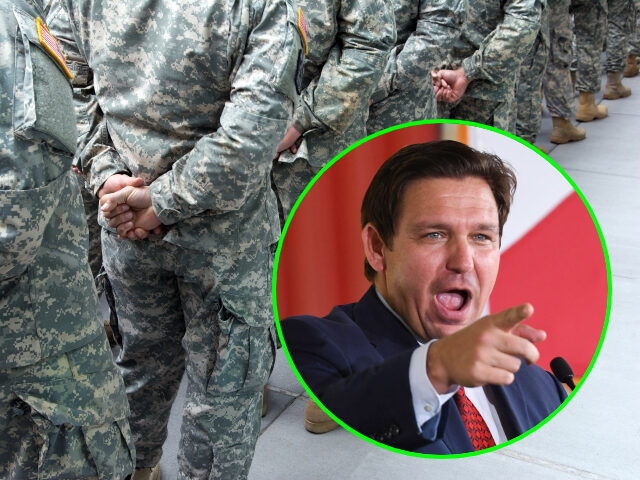 Florida Gov. Ron DeSantis (R) posed a question on Monday following President Biden’s admission that the Chinese coronavirus pandemic is now “over,” inquiring when the president will allow those who were forced to leave the military due to the vaccine mandate to return.

“Biden declared the pandemic is over.  So, when will he let those discharged from the military due to vax mandates return to protecting our country?” the governor asked.

His remark followed Biden’s weekend admission during an appearance on 60 Minutes, conveniently deeming the pandemic “over” weeks ahead of the midterm elections.

Notably, millions of Americans have already accepted the end of the pandemic for well over the last year, long returning to a state of pre-pandemic normalcy despite the Biden administration’s attempts to force masks and vaccines on the American people. In fact, the Supreme Court dealt a massive blow to the president’s latter attempt earlier this year, knocking down Biden’s Occupational Safety and Health Administration (OSHA) mandate, which would have affected tens of millions of American workers.

Former Secretary of State Mike Pompeo made a similar argument after Biden’s admission, contending that Biden is still “kicking tens of thousands of healthy soldiers out of the military with his COVID vaccine mandate.”

“These soldiers should be reinstated immediately,” Pompeo added.

As Breitbart News reported, “The Pentagon is poised to expel tens of thousands of troops who have not complied with Defense Secretary Lloyd Austin’s vaccine mandate, issued in August 2021.” Republican lawmakers say 100,000 troops face discharge over the president’s vaccine mandate.

“And now, after the Pentagon has tried, and failed, to make up the difference by reducing recruitment standards, over 100,000 active servicemembers—who taxpayers paid to train—face discharge during the worst recruiting year in our military’s history,” Rep. Mike Johnson (R-LA), said in a statement.

Thousands of troops have already been given involuntary discharges due to the mandate.

The Gateway Pundit reported earlier in September that “Trident Order #12” was quietly canceled by the US Navy. “Trident Order #12,” disqualified SEALs seeking religious exemptions from the COVID-19 vaccine.  SEALs seeking the exemption would be barred from training, traveling for deployment and conducting other standard business thus making them un-deployable.

Now the US Marine Corps has announced changes to their policies. Marines who decline the Covid vaccine for religious reasons will no longer be punished.

The New York Post reports that, “The administrative order also states that a Marine’s vaccination status cannot be used against them in fitness reports or other performance evaluations.”

The U.S. Marine Corps issued guidance to roll back its strict punishments for service members who are seeking COVID-19 vaccine exemptions.

In guidance posted online on Sept. 14, the “Marine Corps will not enforce any order to accept COVID-19 vaccination, administratively separate, or retaliate against Marines in the class for asserting statutory rights under the Religious Freedom Restoration Act.”

That guidance was changed following a recent Florida federal court order that temporarily blocked the Marines from taking action against individuals who seek a religious exemption. The latest guidance posted by the Marines made reference to that order, which was handed down in August.

The order was issued in a Florida court,  Marines, however, could still be at risk of separation if the order is revoked at a later date.

The decision comes as every branch of the US military struggles to meet 2022 recruiting goals.

On Wednesday afternoon, the California legislature gave its final approval to SB 107, which designates the state a safe haven for children looking to receive “gender-affirming” healthcare, even against the wishes of their parents. The bill, which will now head to Governor Gavin Newsom”s desk, was introduced by State Senator Scott Wiener in 2021.

On Wednesday afternoon, the California legislature gave its final approval to SB 107, which designates the state a safe haven for children looking to receive ‘gender-affirming’ healthcare, even against the wishes of their parents.

The bill, which will now head to Governor Gavin Newsom’s desk, was introduced by State Senator Scott Wiener in 2021.

SB 107 would make the state a safe haven for child gender medical interventions, prohibiting out-of-state authorities from acting on subpoenas, warrants, and child custody issues if the minor was brought into the state for procedures like surgical gender reassignments or the prescribing of cross-sex hormones.

The bill would also “prohibit law enforcement agencies from making, or intentionally participating in, the arrest of an individual pursuant to an out-of-state arrest warrant based on another state’s law against receiving or allowing a child to receive gender-affirming health care.”

Addressing the California legislature before SB 107 passed, attorney Erin Friday, spoke out against the bill, stating that “my daughter thought that she was transgender for two years but changed her mind.”

“Thankfully I did not medicalize her. If California wanted to provide a refuge for only families that unanimously agree to gender interventions, it did not need to amend the Family Code.

“Family Code section 3421 D provides: the presence of a child in this state for the purpose of obtaining gender-affirming health care is sufficient to give California courts the right to make initial custody determination.

“So if an out of state child gets to California, California decides which parent, if any, gets custody. Normally, pursuant to the interstate compact for juveniles, California courts would send that child back to her home state,” she continued.

“This law entices minors seeking gender interventions against their parents wishes to run away to California.

“Family Code section 3424a states: A court of this state has temporary emergency jurisdiction if the child is present in this state, because the child has been unable to obtain gender affirming care.

“So if parents disagree on whether or not to permit their 14 year old daughter to have her breasts removed and the ascending parent and child arrives in California. California will decide which parent gets custody.

“We parents know who will win that battle.

“Pursuant to Family Code 3428: It is not kidnapping if the non custodial parent absconds with the gender confused child to California.

“This is the plain language of SB 107. Ask Senator Wiener how the law affects out of state parents who disagree about subjecting their child to medical treatments when one parent gets to California. Ask him if the law permits California ignore out of state custody agreements. Ask him what would have happened to my child if my husband wanted to medicalize her,” she concluded.

Mark Zuckerberg’s fortune is slashed in half as Meta chief loses $71 BILLION this year after pivot into Metaverse: Share price plummets by 57% in a year