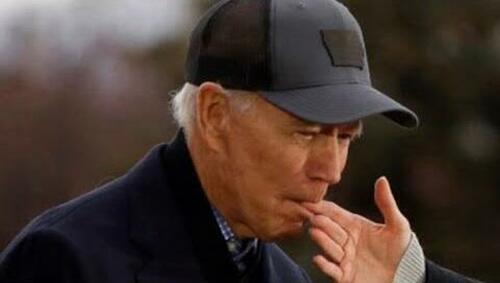 President Biden’s latest gaffe – no not the pedophile one –  was quite the doozy.

While reading remarks during a White House Conference on Hunger, Nutrition and Health, Biden asked if the late Rep. Jackie Walorski (R-IN) was in attendance.

Walorski was tragically killed in a car crash last month.

“I want to thank all of you here, including bipartisan elected officials like Rep. McGovern, Sen. Braun, Sen. Booker, Rep. — Jackie, are you here?” Biden said. “Where’s Jackie? I thought she was going to be here — to help make this a reality.”

“We may have represented different parties and disagreed on many issues, but she was respected by members of both parties for her work on the House Ways and Means Committee on which she served,” reads the statement (which Biden totally wrote). “She also served as co-chair of the House Hunger Caucus, and my team and I appreciated her partnership as we plan for a historic White House Conference on Hunger, Nutrition, and Health this fall that will be marked by her deep care for the needs of rural America.”

They really aren’t sending their best…

Joe Biden’s cognitive decline is rapidly accelerating as he approaches his 80th birthday.

Joe Biden on Wednesday delivered remarks at a White House conference on hunger, nutrition and health.

At one point Joe Biden asked, “Jackie are you here? Where’s Jackie?” referring to GOP Rep. Jackie Walorski who recently died in a car accident.

“These moments of confusion are happening w/increasing frequency,” another reporter said.

Biden lapdog reporters jumped in began shouting over the other reporter.

“Can you explain where the mistake was made? Did the President–was [he] confused? Was there something…in the teleprompter…he didn’t recognize? Can you just help us understand?” CBS News Radio’s Steven Portnoy asked.

“I mean, you’re jumping to a lot of conclusions,” KJP quipped.

Even the Washington Post asked why Joe Biden thought Jackie Walorski was alive and in the room this morning.

“I think we all…get why [Walorski’s] top of mind. You’ve made that case pretty effectively…[W]hy…does [Biden]t think…she’s living and in the room?” Washington Post reporter Matt Viser asked.

KJP went in circles and didn’t answer the question.

“Does [Biden] believe that, in his reference to the late Rep. Walorski…he handled that reference appropriately or is this something that he would like to get back?” Philip Wegmann asked.

‘I feel sorry for him, bless him for trying:’ Late Jackie Walorski’s brother says he PITIES slow Joe Biden after the President mistakenly tried to call the dead Republican Congresswoman up to speak on stage