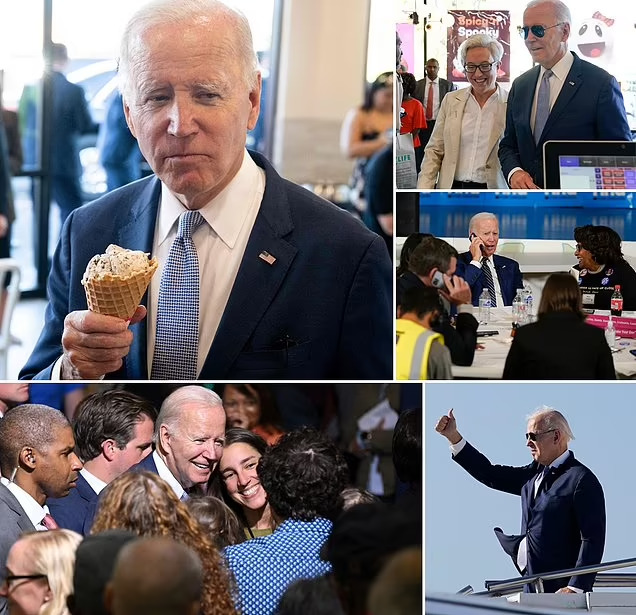 President Joe Biden warned that Donald Trump would continue to wield power over state governments so long as he controlled the Republican Party during a Saturday rally to boost Democrat Tina Kotek in Oregon’s tight race for governor.

Biden finished his western swing in Portland where Republicans believe they can now wrest control of the deep-blue state from Democrats for the first time in 40 years.

A mix of high crime, homelessness and an independent spoiler candidate has propelled GOP nominee Christine Drazan into first place.

Biden introduced Kotek to the crowd saying she ‘had the lion of a heart’ as he emphasized the huge stakes in play.

‘As long as Trump controls the Republican Party, he’s going to have incredible impact on state legislative bodies,’ he told the crowd at the Pacific Northwest Carpenters Institute.

He said the role and impact of governors was increasing exponentially.

‘It’s a race that matters well beyond the state of Oregon,’ he said.

Voters have been drifting away from the Democratic Party in the region, disillusioned with leaders who have softened laws on hard drugs and presided over record increases in crime.

Now they are flirting with electing the state’s first Republican governor since 1982 -when Men at Work were at number one and Diet Coke had just been launched.

Biden arrived with a message that his administration was driving down drug costs for the elderly and had passed legislation that will reduce inflation.

He delivered it with a warning that things would return to ‘trickle-down economics’ if the Republicans made gains in next month’s midterms.

‘That’s where we’ve been,’ he said to an enthusiastic crowd in a community center hall.

‘If the wealthy do well, it trickles down.

‘When the middle class does well working class people have a way up and the wealthy do just fine.’

His visit comes as the Republican candidate continues to hold a slight lead in the race to be governor, potentially turning the state red for the first time since the 1980s.