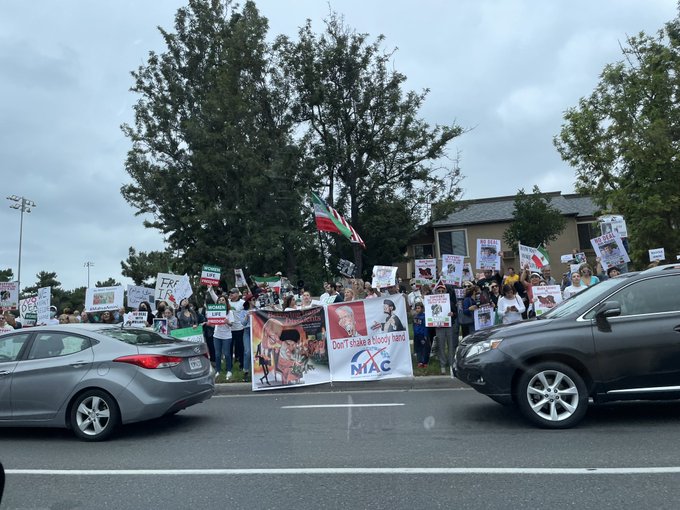 Inflation rates are at 40-year highs because of Joe Biden’s tax-and-spend policies.

Orange County is a conservative enclave in Southern California so Biden didn’t get a warm welcome.

Creepy Joe strikes again! Biden sneaks up behind girl, grabs her shoulders and tells her ‘no serious guys until you’re 30’ – as the uncomfortable teen tries to laugh it off

President Joe Biden appeared to grab a young girl by her shoulder telling her ‘no serious guys till you’re 30’ while posing for a photograph with the teen and her friends at Irvine Valley College in Irvine, California, on Friday.

The president visited the community college to meet with older adults and tout his administration’s efforts to reduce inflation and drive down costs.

But as the visit came to and end, he stood to pose with some of those who had gathered to hear his remarks.

Aside from explaining how he might curb inflation and lower the cost of prescription drugs, the president also dished out dating advice.

‘Now, a very important thing I told me daughters and granddaughters – no serious guys until you’re 30!’ he told a bemused teen.

Biden stood to take a photograph with the girl. As he did so, he appeared to sniff the girl’s hair before imparting the ‘fatherly’ relationship advice.

The girl appears to be genuinely uncomfortable and laughs nervously as she turns around to look at the commander-in-chief, who continues to rest his hands on her shoulder.

‘I’ll keep that in mind!’ she responds while laughing it off.

The creepy moment was captured by reporter Kalen D’Almeida who then posted it to his Twitter account.

D’Almeida noted how a secret service agent appeared to try to stop him from filming as the awkward encounter took place.

In March, Biden also took it upon himself to give the exact same dating advice to a group of eight-year-old, third-grade schoolgirls, saying ‘the only thing I want you girls to remember, no serious guys ’til you’re 30 years old.’

Many Twitter users were deeply uncomfortable with the president’s behavior on Friday.