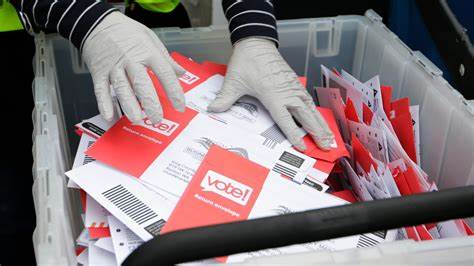 Once again, Democrats proved they can survive anything as long as they have their fraud.

Americans reject every single dish the Democrats served. Yet, Democrats shocked Americans on Tuesday to win the US Senate, steal battleground states, and possibly keep the US Congress in Nancy Pelosi’s control, one of the most corrupt and dishonest politicians in US history.

Republicans dominated in states like Florida and Ohio, states Democrats have not yet stolen with their mail-in ballots, bloated voter rolls, ballot trafficking and manufacturing operations.

But Democrat John Fetterman, who never held a job and cannot form sentences, won in Pennsylvania. Colorado stole popular conservative Lauren Boebert’s seat with their mail-in voting. Georgia elected a Trump-hating governor but Marxist radical Raphael Warnock who likes to scream about whitey at his church won the first round of the Senate race.

California and New York proved to America that once the communists take control there is no going back – to civility.

The Witches of Eastwick won Michigan.

Ron Johnson is barely leading in Wisconsin to another black Marxist radical who wants to empty the prisons onto the streets of America.

And in Arizona, a red state, we are supposed to believe Kari Lake and Blake Masters are going to lose?

By morning we will see the true damage.

Tuesday was a blood moon. It turned into a bloodbath for Republicans.

Republicans believed they would have a great midterm. They forgot that America is now under the control of the Communists.

In Arizona, the ballot drops are still coming in, and it’s looking golden for Kari Lake.

It’s safe to say that with 400K heavily Republican outstanding ballots still to be counted, Kari Lake is going to pull out this victory.

‘I got this wrong, I apologize’: Mark Zuckerberg says sorry as he tells workers in 6am email that he’s slashing 11,000 jobs – around 13% of its workforce – in one of the biggest US layoffs this year after shares lost two thirds of their value

The Facebook founder told executives in a meeting yesterday that 11,000 jobs will be cut, with recruiting and business teams to face major losses.

Zuckerberg, 38, was said to have appeared gloomy on the call and also said he was accountable for missteps made by Meta.

Employees received the confirmation about the cuts in a company-wide email which was sent at 6am EST this morning – with staff able to keep their email addresses for an extra day to say ‘farewell’.

The CEO admitted that he ‘got it wrong’ in the message and he ‘takes responsibility’ for the problems which caused him to make the cuts – which make up 13 percent of Meta’s workforce.

It is the first time in Meta’s 18-year history that they will be making major layoffs, which follow redundancies at other major tech companies including Twitter and Microsoft Corp.

Taking a page out of Twitter CEO Elon Musk’s book, Zuckerberg sent the early morning email to all employees letting them know the company had lost two thirds of its value.

He said: ‘Not only has online commerce returned to prior trends, but the macroeconomic downturn, increased competition, and ads signal loss have caused our revenue to be much lower than I’d expected.

‘I got this wrong, and I take responsibility for that.’

He also said the company was overstaffed because he was overly optimistic about the its growth.

Zuckerberg stressed the company would shift resources to ‘high priority growth areas’ such as its AI discovery engine, ads and business platforms, as well as its metaverse project.

The pandemic boom that boosted tech companies and their valuations has turned into a bust this year in the face of decades-high inflation and rapidly rising interest rates.

As of the market opening on Wednesday the share price has risen five per cent today, with a bigger increase expected.

Here is a list of countries that have banned or monitored the use of EVMs.

The Netherlands is another country that has questioned the use of EVMS. The country banned the use of EVMs stating that they lack transparency. This decision was taken by the Dutch council in 2008 after people questioned the authenticity of the voting machines. Dutch TV carried a story where one change the EPROM of the Nedap voting machine changed the output making people question its credibility.

Ireland spent millions of dollars on the installation of EVMs and to use them during the political elections. However, after spending more than 51 million pounds for three years, Ireland went forwards and scrapped the electronic voting system citing it to lack of trust and transparency in the voting machine.

England has had various pilots for the electronic voting system to be used. However, these pilots have never led to the use of EVMs in the country. England is one of the few countries that has stayed away from the modern methods in political elections, and the government plans to continue on the same path. In January 2016, the UK Parliament revealed that it has no plans to introduce electronic voting for statutory elections, either using electronic voting in polling booths or remotely via the internet

Electronic voting was used in a national presidential primary in 2007. While the country has chosen to vote via the internet, EVMs have not been used in France. Elections in France utilised remote Internet voting for the first time in 2003, and this idea was made a custom in 2009 as people chose the internet voting system over paper.

In 2006, Italy used Nedap Voting machines in the national elections. The pilot project involved 3000 electors and four polling stations. However, after the pilot project was completed, the country chose to go back to paper as it is easy to manage and cheaper.

While these countries have banned or refrained from using EVMs, there are others who have taken a systematic approach and backed the use of EVMs with paper ballots. In various parts of the United States of America as well as in  Venezuela EVMs are used on a large scale but are backed by paper trails of the votes. This simple step helps the government to regularize and check the authenticity of votes and avoid any discrepancies.

‘So the GOP is winning exactly zero of the races that they were expected to contest in blue states while Democrats are getting destroyed in areas where there is tight election security. Imagine that.’

Former White House Press Secretary and current MSNBC host-in-waiting Jen Psaki gave late-night viewers the scoop from inside President Joe Biden’s administration after she’d spoken to her ex-colleagues about the “gleeful and giddy” mood over the midterms.

An MSNBC election team led by Rachel Maddow covered Tuesday night’s midterms well into Wednesday morning, delivering every detail of what has turned out to be a disappointing night for Republicans.

But as the clock neared two in the morning, Maddow and her studio panel weren’t exactly depressed about the situation. Maddow called the unfolding results “a huge political endorsement of Joe Biden as president of the United States,” and asked Psaki what the White House can do with such results. Psaki predicted chicken fingers, French fries, and ice cream to start with.