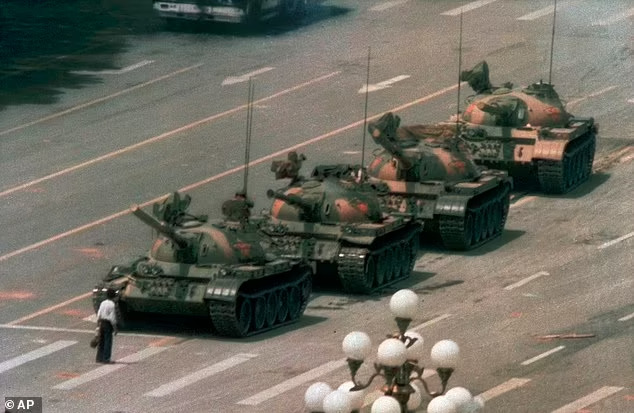 Protesters defying China’s brutal Communist regime and its hash zero-Covid policies are being compared to Tiananmen Square’s famous ‘tank man’ in a move sure to send shivers down spines in Beijing.

One piece of footage, thought to have been captured in the city of Shanghai during clashes at the weekend, shows a man standing in the path of a police riot van before he is bundled to the floor and beaten by officers.

A second, thought to come from the city of Pingxiang also at the weekend, shows a female demonstrator calmly filming riot police before her phone is slapped out of her hand and hazmat-suited guards begin dragging her away.

As both videos spread online, Chinese social media users compared them to ‘tank man’ who blocked People’s Liberation Army tanks as they left Tiananmen Square on June 5, 1989, the day after protesters demanding greater rights were massacred.

Tucker Carlson: Apple is covering for the Chinese government

Anti-government protests flared in several Chinese cities and on college campuses over the weekend. But the country’s most widespread show of public dissent in decades will have to manage without a crucial communication tool, because Apple restricted its use in China earlier this month.

AirDrop, the file-sharing feature on iPhones and other Apple devices, has helped protestors in many authoritarian countries evade censorship. That’s because AirDrop relies on direct connections between phones, forming a local network of devices that don’t need the internet to communicate. People can opt into receiving AirDrops from anyone else with an iPhone nearby.

That changed on Nov. 9, when Apple released a new version of its mobile operating system, iOS 16.1.1, to customers worldwide. Rather than listing new features, as it often does, the company simply said, “This update includes bug fixes and security updates and is recommended for all users.”

Hidden in the update was a change that only applies to iPhones sold in mainland China: AirDrop can only be set to receive messages from everyone for 10 minutes, before switching off. There’s no longer a way to keep the “everyone” setting on permanently on Chinese iPhones. The change, first noticed by Chinese readers of 9to5Mac, doesn’t apply anywhere else.

AirDrop has been an effective communication tool for protestors in Hong Kong, as Quartz previously documented. It’s been used to communicate with other protestors, reach passersby, and spread messages to tourists from mainland China visiting Hong Kong. On the mainland, protestors have also AirDropped protest literature, particularly on college campuses where some of the current protests have broken out. China’s control of the internet has become so strong that dissidents must cling to any crack in the so-called Great Firewall.

Apple didn’t respond to questions about the AirDrop change. It plans to make the “Everyone for 10 Minutes” feature a global standard next year, according to Bloomberg. AirDrops can indeed be a nuisance in normal settings: If you opt into receiving files from everyone and don’t turn it off, you might find yourself on the receiving end of unwanted memes or worse.

But why did Apple rush out the change unannounced, in an unassuming update to iOS in early November, and apply it only to Chinese iPhones? One clue may lie in what happened the month prior, when Xi Jinping’s anointment to a third term as China’s leader was met with rare displays of public dissent.

In the most visible protest, a dissident now known as Bridge Man lit a fire on a bridge in Beijing to draw attention to his protest banners. One read, “Go on strike at school and work, remove dictator and national traitor Xi Jinping.” References to the banners were quickly censored across the Chinese internet, but photos still made their way through private channels. Vice reported that Bridge Man’s messages were spreading on the Shanghai subway via AirDrop.

Apple has repeatedly helped China control dissent, mostly by removing apps that protestors have used to coordinate, communicate, or gather information. (Quartz’s iOS app was removed by Apple, at China’s request, at the height of the 2019 protests in Hong Kong.) By hobbling the functionality of AirDrop in China, Apple is once again coming to the government’s aid.