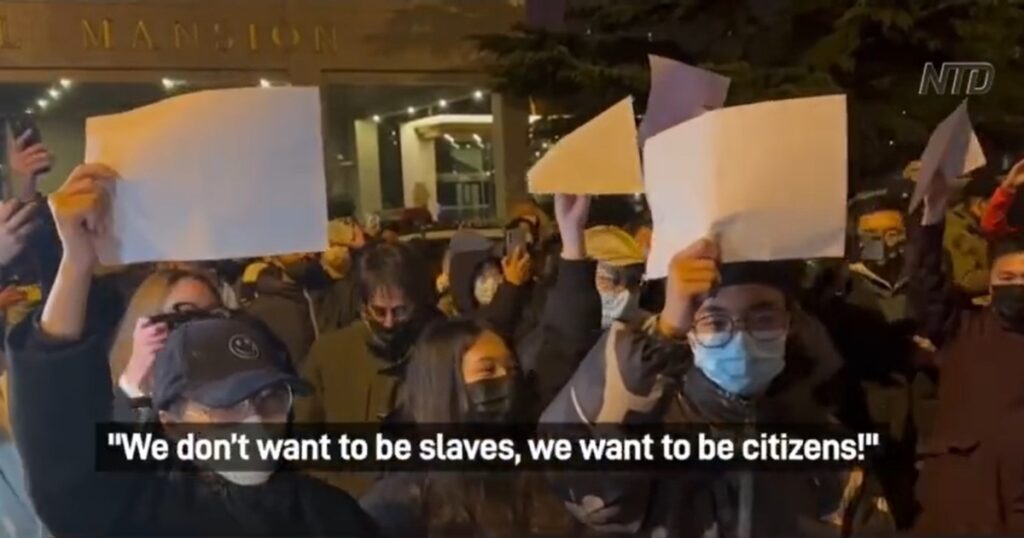 China’s infamous internet police can’t keep up with the massive volume of videos unmasking the unrest in the secretive nation — as fed-up residents protest the government’s draconian COVID lockdown rules.

“This is a decisive breach of the big silence,” Xiao Qiang, a researcher on internet freedom at the University of California, Berkeley, told the publication.

Videos of demonstrators clashing with police, or holding up blank sheets of paper in defiance, have been circulating on social media for days — an atypical and brave display of resistance in authoritarian China.

Footage posted to Twitter on Tuesday show dozens of riot police in Guangzhou moving in formation towards torn-down lockdown barriers as protestors threw objects at them.

The Communist Party’s top law enforcement authority vowed in a statement Tuesday that China would crack down on “the infiltration and sabotage activities of hostile forces.”

The Central Political and Legal Affairs Commission also said it would not tolerate “illegal and criminal acts that disrupt social order.”

But the protest videos keep circulating.

According to Qiang, China’s reliance on automation to censor its citizens online has, in part, made it difficult to clamp down on the social media resistance — as incidents were filmed from multiple angles with multiple chances to go viral.

“Once the anger spills on to the street it becomes much harder to censor,” Qiang said.

One former Chinese censor told the New York Times that Beijing would need to hire many more minders — and develop more sophisticated surveillance algorithms — if it wanted to stem the torrent of videos being spread online.

Protestors have also discovered workarounds — adding filters, or making videos of videos playing on other devices — in a cunning and apparently successful bid to outwit state censors.

Reports over the weekend said police in China were confiscating cell phones, looking for photos or videos from protests, and deleting them — along with any VPN software.

The days of defiance were sparked by a deadly fire last week in the far western city of Urumqi, in which rescue efforts were reportedly hampered by the country’s strict COVID lockdown restrictions.

The city had been under COVID lockdown for 100 days.

BREAKING: Apple backs down, Tim Cook tells Elon they will not ban Twitter from App Store

The meeting came after Musk caught wind of Apple and Google reportedly threatening to remove the Twitter app from their store, to which Musk responded to by threatening to create his own brand of phones outside of the two tech corporations’ reaches.

Apple “never considered” removing Twitter from its App Store, said Elon Musk on Wednesday after meeting with the CEO of the technology company, Tim Cook.

On Wednesday afternoon, Musk posted a photo of the Apple campus, thanking Cook for a tour of the tech giant’s headquarters. Musk recently said he would “go to war” with Apple over their developer tax.

The meeting came after Musk caught wind of Apple and Google reportedly threatening to remove the Twitter app from their store, to which Musk responded to by threatening to create his own brand of phones outside of the two tech corporations’ reaches.

Check your 401(k)’s fine print! Because now Biden wants to raid YOURS to fund net zero and ‘diversity’. But why should his woke agenda put your retirement at risk, demands ANDY PUZDER

Andy Puzder is a former CEO of CKE Restaurants, chairman of 2ndVote Value Investments, Inc., and a visiting fellow at the Heritage Foundation

If you are among the tens of millions of Americans with a 401(k), you’d better pay attention.

The Biden administration is putting your retirement money at risk in pursuit of their woke leftist agenda.

The rule interprets a law that requires fund managers make investment decisions for the sole benefit of the Americans who depend on those assets.

That’s certainly both a good and reasonable policy. And at one time, it was bipartisan.

Congress passed ERISA (the Employee Retirement Income Security Act) in 1974. The law makes it crystal clear that those managing such assets must do so ‘solely’ in the interest of and for the ‘exclusive purpose’ of ‘providing benefits to participants and their beneficiaries.’

This patently clear language provides no basis for investing assets to prioritize – say – saving the planet, achieving ‘equity,’ or in any way advancing wokeism.

Well, enter the Biden Administration and ‘environmental, social and governance’ – or ESG – investing.

ESG is a set of ill-defined, non-financial investment criteria used to screen potential investments based on how well a company is pursuing certain social or political goals.

The Principles include a pledge to ‘incorporate ESG issues into investment analysis and decision-making processes.’

While there is no generally accepted definition, ESG often includes things such as advancing the goal of net zero carbon emissions (a.k.a. destroying America’s energy sector and driving up energy prices), hiring to create diversity (a.k.a. discrimination based on race or sex rather than qualifications, merit, or character) and acceding to employee demands (a.k.a. unionization).

According to PRI’s website, over 5,000 financial institutions – including almost every major US asset manager – have signed on.

Since then, ESG hasn’t built the best track record.

Earlier this year, ESG leader and advocate, the investment company Blackrock, set a record for ‘the largest amount of money lost by a single firm over a six-month period’ having ‘lost $1.7 trillion of clients’ money,’ according to Bloomberg.

But these ESG losses were not restricted to Blackrock.

As Bloomberg noted in May, ‘[i]nvestors are yanking cash from the sector at the fastest pace in a year, while two of the biggest exchange-traded funds tracking the industry… have each tumbled at least 24% in 2021’.

That rule instructs plan managers to consider only financial performance and risks when making investment decisions.

Explaining the rule, Secretary Scalia wrote that ‘[a] fiduciary’s duty is to retirees alone, because under ERISA one ‘social’ goal trumps all others—retirement security for American workers.’

It’s a legal principle that closely tracks with ERISA and it compels fiduciaries to seek financial returns above political or social goals.

In September, the attorneys general for Louisiana and Indiana cautioned their state pension boards that ESG investing may violate their fiduciary duty.

The not-so-subtle warning to fund managers: Don’t get carried away with ESG, because you may be liable for losses.

And in a rarely matched act of arrogance, they label doing so as, ‘prudence.’

Well, according to Biden’s Labor Department, the Trump era rule had a ‘chilling effect’ on consideration of ‘environmental, social and governance factors in investments.’

But that’s just not true.

The Trump-era rule permitted consideration of ESG factors as long as doing so was consistent with ERISA’s requirement that such investing be ‘solely’ and for the ‘exclusive purpose’ of generating financial benefits for retirees.

As Scalia noted, ‘[s]ometimes, ESG factors will bear on an investment’s value’ and should be considered. The intent was not to eliminate ESG criteria from consideration when evaluating an investment.

But that clearly was not good enough for a Biden administration desperate to use massive pools of private investor money to fund the businesses they like and punish the ones they don’t like.

If that weren’t the case, they wouldn’t need a new rule.