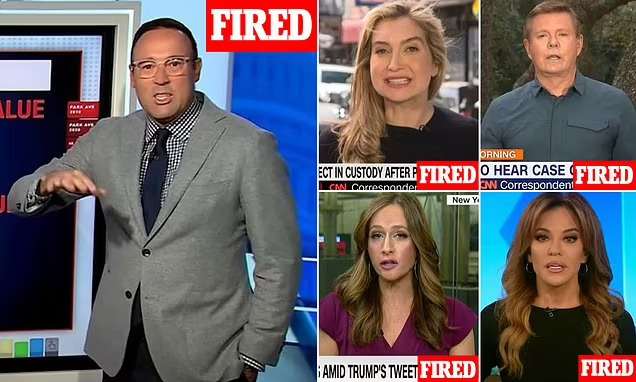 The latest round of layoffs at CNN has hit some of the network’s biggest names.

Political analyst Chris Cillizza, 46, who has been covering national politics, the White House and Congress for the cable giant since 2017, after coming over to the network from The Washington Post, was among those who were let go this week, Variety reported.

Business correspondent Alison Kosik, 51, who covers the New York Stock Exchange and has been at the network since 2007 was nixed. She earns an average annual salary of between $100,000 and $145,143.

Alexandra Field, 31, who covers major breaking news events for CNN and CNN International, and has reported from more than 20 countries was dismissed. She was working from the network’s Asia-Pacific headquarters in Hong Kong. She earns an estimated annual salary of $144,167.

Martin Savidge, 64, an anchor and correspondent for CNN based in the network’s world headquarters in Atlanta, who returned to the network in 2011 was let go.

Mary Ann Fox, Vice President of Northeast News, who oversaw the editorial direction and day-to-day operations of the New York Bureau, and had been at CNN since 2014, was also sacked this week. It’s estimated that her yearly salary is $1 million.

The cable news giant also scrapped all of HLN’s live programming, including longtime host Robin Meade, 53, who was with the weekday Atlanta-based morning show for more than 21 years. It is estimated that her annual salary is $3 million, making her one of the highest paid female anchors in the business.

Michael Burry, the famous investor behind “The Big Short” warned of rising inflation and a huge market bubble.

Back in October 2021 Burry also commented on the misinformation and persecution of conservatives that is permeating the current culture.

On Monday investor Michael Burry warned of a “real” multi-year recession for the U.S.

In a now-deleted tweet, Burry told his followers: “What strategy will pull us out of this real recession? What forces would pull us so? There are none. So we are really looking at an extended multi-year recession. Who is predicting this? There are none.”

After two consecutive quarters of contraction, the U.S. economy picked up in Q3. The second estimate released Wednesday morning showed that the U.S. GDP rose 2.9% versus markets’ expectations of a 2.7% increase. This comes after two negative readings of -1.6% and -0.6% in Q1 and Q2, respectively.

But with the Federal Reserve raising rates by 350 basis points year-to-date, the U.S. economy is bound to slow. And Burry’s outlook is far from optimistic. Markets are also looking for another 50 basis-point increase at the December FOMC meeting.

In the short term, investors are focused on the U.S. jobs report from October, which will be released this Friday. The idea is to gauge how aggressive the Federal Reserve will have to be into the year-end.

Earlier this month, Burry highlighted gold in a rare comment, stating that this is the time for the precious metal to rally, citing the crypto contagion risk post-FTX collapse.

“Long thought that the time for gold would be when crypto scandals merge into contagion,” Burry said in a tweet that has since also been deleted. Burry is known to delete his tweets shortly after posting them.

Since the 2022 elections several companies have announced massive layoffs including Twitter, HP, Amazon, CNN, Kavak and others.

WH: We Won’t Tell Apple to Allow AirDrop in China Because They’re Private, That’s a Different Situation from Us Vowing to Watch Twitter

On Wednesday’s broadcast of the Fox News Channel’s “The Story,” White House NSC Coordinator for Strategic Communications John Kirby responded to Apple limiting the AirDrop file-sharing feature in China by stating that the White House isn’t “in the business of telling private companies how to execute their initiatives.” And the situation with Apple is different from the circumstances with Twitter that the White House has promised to watch.

Kirby stated, “Look, in general, and we’ve been clear about this all around the world, we want individual citizens, no matter what government they live under, to be able to communicate freely and openly, transparently and reliably. And we’ve made that clear with respect to Iran and we certainly continue to make that clear here with respect to China. Apple’s a private company, Martha, they have to make decisions and they have to speak for those decisions. But here at the White House, here in the administration, we want to see that individual citizens — whether they’re protesting or not, but in this case, I know that’s the context we’re talking about — are able to communicate freely and openly.”

Host Martha MacCallum then asked, “But why not say something to Apple? Because we were just told the other day that the White House is keeping an eye on Elon Musk and Twitter. So, why would you say that from the podium…and not call Apple out for helping the Chinese government to suppress their own people’s ability to communicate?”

Kirby responded, “Again, I think we’ve been very clear and consistent on this. Certainly, publicly, we’ve been very open about our desires to be able to see citizens communicate. And Apple, if this is a decision that they’re making, then they should have to speak to that. But we’re not — we can’t and we aren’t in the business of telling private companies how to execute their initiatives.”

MacCallum then cut in to ask, “Yeah, but Twitter’s a private company, too. So, why is Twitter getting one treatment and Apple’s getting another is my question?”

Kirby answered, “Well, those are completely two different circumstances. You’re talking about the potential for perhaps foreign investment and involvement in the management of Twitter. That’s a different issue than what we’re talking about here, which is a business decision by Apple with respect to how one of their applications is being utilized.”