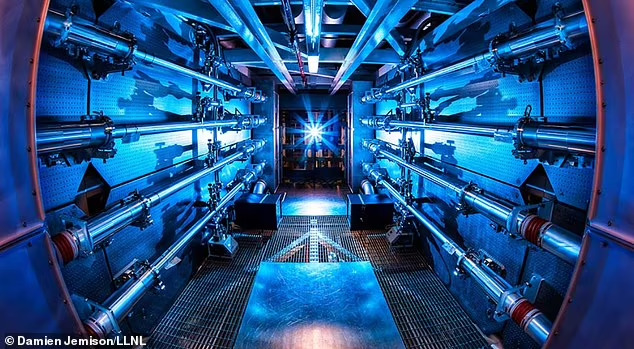 Is this the dawn of unlimited clean energy? California scientists make history after using world’s biggest laser to replicate reaction that powers the sun – which could spell the end of fossil fuels

California scientists may have discovered a source of unlimited clean energy by recreating the process of nuclear fusion which powers the sun.

Researchers at the National Ignition Facility at the Lawrence Livermore National Lab in Livermore were able to spark a fusion reaction that briefly sustained itself – a major feat because fusion requires such high temperatures and pressures that it easily fizzles out.

The experiment was performed in August, but reported for the first time earlier this month. Similar tests have been performed before, but this was the first one that generated more energy than was used to create the experiment – meaning scientists could now harness nuclear fusion as an energy source.

But it could now represent a groundbreaking moment in humankind’s move away from fossil fuels like oil and coal to completely clean energy sources that do not pollute the air, or scar landscapes with mining or pipelines.

The ultimate goal, still years away, is to generate power the way the sun generates heat, by pushing hydrogen atoms so close to each other that they combine into helium, which releases torrents of energy.

A single cupful of that substance could power an average-sized house for hundreds of years, with no carbon emissions.

Using the world’s largest laser, consisting of 192 beams and temperatures more than three times hotter than the center of the sun, the researchers coaxed fusion fuel for the first time to heat itself beyond the heat they zapped into it – achieving a net energy gain.

Fusion reactions emit no carbon and produce no long-lived radioactive waste. Nuclear fusion presses together two types of hydrogen found in water molecules. When they fuse, ‘a small amount (milligrams) of fuel produces enormous amounts of energy and it’s also very `clean´ in that it produces no radioactive waste,’ said Carolyn Kuranz, an experimental plasma physicist who wasn’t part of the research.

The US Department of Energy say they will be announcing a ‘a major scientific breakthrough’ at the Lawrence Livermore National Laboratory this Tuesday.

‘Initial diagnostic data suggests another successful experiment at the National Ignition Facility,’ the lab said. ‘However, the exact yield is still being determined and we can’t confirm that it is over the threshold at this time. That analysis is in process, so publishing the information…before that process is complete would be inaccurate.’

‘If this is confirmed, we are witnessing a moment of history,’ said Dr Arthur Turrell, a plasma physicist, to the Financial Times.

‘Scientists have struggled to show that fusion can release more energy than is put in since the 1950s, and the researchers at Lawrence Livermore seem to have finally and absolutely smashed this decades-old goal.’

‘It gives the US a lab capability to study burning plasmas and high-energy physics relevant for [nuclear weapons] stewardship,’ Michael Campbell, director of the LLE at the University of Rochester in New York, said to Physics Today.

In a major decision, the United States Court of Appeals for the Eighth Circuit upheld a lower court on Friday that enjoined the Department of Health and Human Services (HHS) from forcing doctors with conscientious objections to perform gender transition surgeries. The case, Sisters of Mercy v. Becerra, concerns a 2016 rule that religious hospitals may be subject to non-discrimination provisions under the Affordable Care Act and that would require them to perform gender transitions.

Under Section 1557 of the Patient Protection and Affordable Care Act, the HHS and the Equal Employment Opportunity Commission found that anti-discrimination provisions requires doctors to perform and provide insurance coverage for gender transitions.

The district court held “that the [Religious Freedom Restoration Act of 1993 (RFRA)] entitles the . . . [p]laintiffs to permanent injunctive relief from the provision or coverage of gender-transition procedures.”

The Biden Administration brought an appeal by challenging the ability of the plaintiffs to be heard in federal court for failure to establish standing, ripeness, and imminent irreparable injury sufficient to justify permanent injunctive relief.

The Eighth Circuit rejected the appeal.