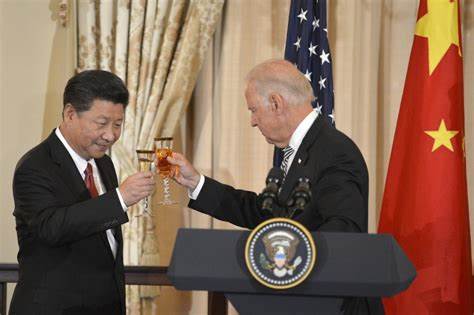 China has Biden right where they want him.

Here are some of the stories we reported since July 2022 where the Biden gang has been bending over backward for China.

Gordan Chang said that we may never know if China has blackmail material on Biden.  However, former spy Sam Faddis is more direct and says Biden is a “controlled asset” of the CCP.

Imagine Six Million illegal migrants in a SINGLE year! Astonishingly, it's about to get easier to enter the US - and says TODD BENSMAN, future generations will never forget the moment the hurricane hit

Every record in the annals of mass migration lay shattered after nearly two years of President Joe Biden's negligent stewardship of the American southern border.

Yet unimaginably, in about a week's time, it's going to get catastrophically worse.

Total known illegal border crossings stand at a record-breaking 4.4 million since President Joe Biden's inauguration with another 1.5 million estimated 'got-aways' believed to have slipped into the country undetected.

Interior deportations are at the lowest number ever and the percentage of global nationalities crossing is at the highest percentage ever.

Still, this pandemonium of 7,000-9,000 illegal crossers caught every single day, 200,000-plus every single month for two years straight, is just a Category 3 hurricane on the mass migration-scale.

A Category 5 is barreling down on the United States with the scheduled December 21 lifting of 'Title 42,' the one last real impediment to a next-level crisis far beyond, not just the American experience, but that of every nation in the developed world.

If U.S. intelligence estimates are to be believed, a previously unthinkable storm is gathering just off America's borders, portending a potentially permanent transformative impact on the country. And barring a last-minute, unlikely appeal by the Biden administration to delay the elimination of Title 42, America is forecast to take a direct hit.

Up for court-ordered demolition later this month, Title 42 is the pandemic-control statute that, since March 2020, has allowed U.S. Border Patrol to quickly expel most crossers back to Mexico and, more importantly in doing so, deny them access to a highly defraud-able asylum system.

This failed asylum system hamstrings deportation and mainlines illegal immigrants straight into America, pretty much forever, for the low, low cost of a tale of woe that need never be proven.

Don't take my word for it.

'I have to be honest about the asylum laws and the processing,' former Obama DHS Secretary Jeh Johnson recently told Face the Nation. 'It takes six years right now to process an asylum claim once someone has entered this country.'

'One of the problems is that the bar to qualify initially … is relatively low,' he continued. 'Something like 70 percent of migrants qualify who seek it, and the ultimate qualification for asylum, the percentage there is about 20 percent, and there's six years in-between.'

Let me repeat Johnson's remarks for emphasis – 70 percent of migrants seeking asylum are allowed into America. Only 20 percent are eventually granted asylum.

'Migrants know this, and so we've got to develop a system where we can more expeditiously deal with these claims…' Johnson concluded. 'I know my friends on the left won't be too happy to hear that.'

U.S. asylum is at the root of this crisis because the simple act of claiming asylum at the border allows largely ineligible economic immigrants to forestall mandatory detention and deportation in a backlogged line years long.

It also enables those who immediately abandon their claims or eventually lose their asylum cases to simply disappear into the country.

But that all changed on Inauguration Day 2021, when Biden opened huge Title 42 exemptions for immigrant families, solo teenagers and pregnant women. This immediately reduced total expulsions to about 60 percent of all apprehended entrants.

That was plenty to trigger the Category 3 hurricane, but Biden's DHS further reduced the expulsions to below 40 percent.

Once this last Title 42 remnant is gone, nothing will stand between a vast and desperate global population and the irresistible pull of the U.S. asylum system.

Mexican media is already reporting that untold thousands from around the globe are on their way, no doubt responding to the promise of quick entry for a vast majority of them.