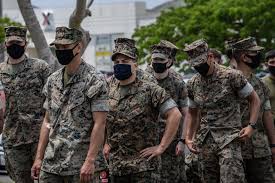 The memo rescinds the vaccine mandate for both active duty, National Guard, and Reserve forces

The Biden Pentagon released a memo from Defense Secretary Lloyd Austin Tuesday evening that formally rescinded its COVID-19 military vaccine mandate, after Republicans forced the administration to back down via defense legislation last month.

The memo rescinds the vaccine mandate for both active duty, National Guard, and Reserve forces.

Austin had ordered, on August 24, 2021, that all forces be fully-vaccinated or else face discharge from the military. At least 8,400 troops were discharged, with several tens of thousands who had applied for accommodation requests — either medical, administrative or religious. Tens of thousands more reservists — up to 60,000 by some estimates — also remained unvaccinated and were on the chopping block, exacerbating a recruiting crisis.

Troops also successfully sued to temporarily enjoin the Air Force, Navy, and Marine Corps from taking action against anyone who had applied for a religious accommodation, and the Pentagon inspector general indicated in a memo to Austin that blanket denials of religious accommodation requests potentially ran afoul of the law.

Some troops also fought the mandate on the basis that the DOD can only mandate FDA-approved vaccines, and that the DOD was administering a different version that was still under Emergency Use Authorization and not FDA-approved. A then-DOD official, Terri Adirim, dubiously argued in a memo that the two vaccines were interchangeable.

Still, the Biden Pentagon refused to consider rescinding the policy until Republicans in the House and Senate fought to have it rescinded via the yearly defense policy bill known as the National Defense Authorization Act, which authorizes defense spending and policies every year.

The Pentagon said in a statement accompanying the release of the memo: “This rescission requirement was established by the James M. Inhofe National Defense Authorization Act for Fiscal Year 2023.”

Biden’s FAA fails to explain catastrophic ‘computer failure’ that delayed at least 7,000 flights and halted America’s air traffic for the first time since 9/11

All flights across America were grounded today for the first time since 9/11 after an as-yet unexplained, FAA computer system failure.

The first complaints by passengers that their flights had been grounded started at around 4am EST, but it wasn’t until 6.30am that the FAA announced it had grounded all flights as a result of an overnight crash of its NOTAM system – which pilots use to receive hazard warnings and safety updates.

By 9am, the issue had been resolved and flights were beginning to take off again.

The FAA is yet to explain how the catastrophic glitch came about or why there was no back-up system in place to ensure planes could continue to fly. All that the White House has said is that there is no evidence of a cyber attack ‘at this point’, but no further details have been given.

As chaos spread throughout the country’s airports, airline industry experts slammed the Biden administration and specifically Transportation Secretary Pete Buttigieg for the debacle.

Some said there is ‘no excuse’ for the failure that is the latest in a string of embarrassing transport headaches since he took office.

White House Press Secretary Karine Jean-Pierre tweeted that there was ‘no evidence of a cyberattack at this point’ but failed to say what had caused the collapse.

Michael Boyd, Chairman of The Boyd Group, an aviation research company, told CNBC’s Squawk Box: ‘The FAA has fallen off the trolley in terms of keeping up their system.

‘There is no excuse for this. We need qualified aviation-related people in charge of the FAA, not people who know people in Washington.’

Donald Trump Jr. said the outage made America look ‘like a third world country’ while Governor Ron DeSantis’ deputy press secretary tweeted: ‘Mayor Pete is having another great day as Secretary of Transportation!

‘Maybe we should spend less time on racist roads and more time on our critical infrastructure.’

‘The last time we had all airplanes grounded was, I hate to say it, but back in 9/11.

‘No airplanes move, so that’s what we’re looking at today,’ he said.

Zach Griff, senior writer at travel experts The Points Guy, told DailyMail.com: ‘Once the system became operational again, flights were theoretically allowed to resume but — and this is the kicker — airlines can’t simply just “restart” their operations.

‘Flight crews can only legally work a certain number of hours, and specific planes were already scheduled for flights that’ve since been delayed.

‘Together, this domino effect will continue to lead to a slew of delays and cancellations throughout the U.S. today and likely into Thursday.

Since first being announced on January 31, 2020, the public health determination has been renewed ten times already, making this latest extension the 11th

Biden first announced in November that he would be extending the public health emergency past January 11, when it was set to expire.

The US Senate voted 62-36 a few days later to end the public health emergency declaration. However, Biden responded that he would veto the decision.

“If you notice, no one’s wearing masks. Everybody seems to be in pretty good shape. And so I think it’s changing,” he added, while walking around the first Detroit Auto Show in three years.

The White House then attempted to backtrack on those claims a few days later.

The extension comes following an announcement from the Pentagon on Tuesday that it would be dropping the vaccine mandate for military service members.

Also extended is the US’s vaccine mandate for foreign travelers arriving in the country, which had been extended by the TSA in December through April 10.

EXCLUSIVE: Home of Biden Think Tank Profits From COVID Vaccines And Had Staff Shakeup Over Accounting of CHINA Money

‘MAKE SURE STUDENT IS FROM CHINA’

Joe Biden’s office at his think tank, the Penn Biden Center at the University of Pennsylvania, reportedly housed numerous classified documents. The scandal has sparked a review from the Biden regime’s own Department of Justice. Approximately ten classified documents are in question, and were found prior to the midterm elections by Joe Biden lawyers, according to a CBS report. NATIONAL FILE has reported shocking details about vaccine sale profits and an internal staff shakeup at the University of Pennsylvania related to foreign money including money specifically intended to increase Chinese enrollment at the university.

University of Pennsylvania financial documents obtained by NATIONAL FILE show that the UPenn fund that bankrolls Joe Biden’s think tank the Penn Biden Center makes money in “milestone payments” from the sale of Pfizer-BioNTech vaccines and from FDA approvals of the injections. The University of Pennsylvania, which paid Joe Biden prior to his presidential run, was accepting big money from donors apparently to carve out spaces for foreign students at UPenn including from Communist China, and NATIONAL FILE can confirm that internal controversy and a staff shakeup occurred when staff questioned how international funds were being spent. With Joe Biden able to return to the Penn Biden Center after his presidency, Biden puts himself in a position to personally profit from the vaccines he is pushing.

Under the watch of UPenn president Amy Gutmann, massive amounts of money have flowed into the university’s funds apparently to import students from around the world including from Communist China and the “People’s Republic of China” with administrator notes including “MAKE SURE STUDENT IS FROM CHINA…” Amy Gutmann, the UPenn president who oversaw the establishment of Joe Biden’s think tank the Penn Biden Center in 2018, is now Biden’s Ambassador to Germany. There were arguments in the UPenn administration about where the Chinese-oriented money and other foreign money was going. Some insiders questioned how funds for international students were being managed without transparency, and the arguments led to a staff overhaul. The controversy stemmed from funds set aside for international students.

UPenn’s China links are numerous, as evidenced by its Center for the Study of Contemporary China and the Penn Wharton China Center. In 2019, UPenn’s foreign donations spiked approximately 389 percent.

The Penn Biden Center is housed on the UPenn campus and in Washington, D.C. pulling funds directly from the general funds of the University of Pennsylvania, and Joe Biden or his surrogates can return to the Penn Biden Center after his presidency. Joe Biden’s think tank was previously managed by his current Secretary of State Tony Blinken. One donation specified “$25k each” in payment to UPenn in exchange for “Students from the People’s Republic of China admitted…”

The University of Pennsylvania also houses the pro-vaccine website FactCheck.org. University of Pennsylvania president Amy Gutmann is now Biden’s nominee for Ambassador to Germany. The Biden administration’s FDA has speedily approved or authorized Pfizer-BioNTech vaccines including for children — all while the Penn Biden Center’s parent university enjoys massive profits from vaccine sales and FDA approval. And the Pfizer-connected FDA even knew about numerous adverse events for children related to the Pfizer-BioNTech vaccine, but allowed children to be injected with it anyway. Now, the direct financial relationship between these vaccines and Joe Biden’s think tank must be exposed.