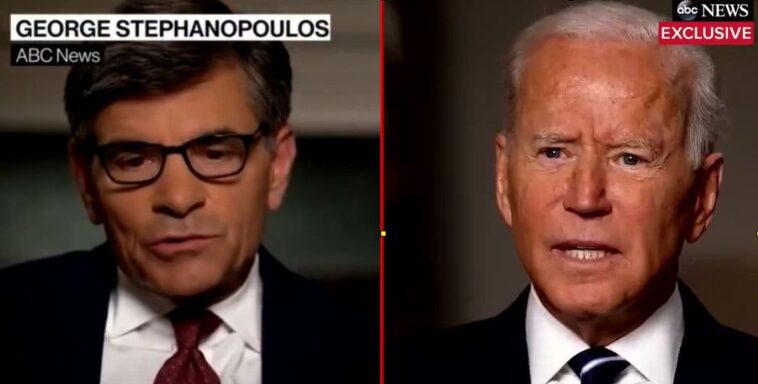 President Joe Biden may have just come off as the most unpresidential that he ever has in his short time in office. In an ABC News interview with George Stephanopoulos that will be aired in full on Wednesday night, a pre-air clip reveals that Biden is every bit out of his depth as millions of Americans feared.

Biden sat down with the former Clinton staff member George Stephanopoulos in a one-on-one interview that is set to air after his press conference on Wednesday. President Biden emerged from his Camp David retreat to discuss Covid regulations, and did not issue a statement on Afghanistan. When reporters attempted to get him to answer questions on the fall of the country after two decades of war, he turned and ran.

The Stephanopoulos interview, therefore, is the first look at Biden being challenged to defend his decision to ignore his generals, particularly the Joint Chiefs of Staff, as well as the Pentagon, with his decision to pull military forces before American diplomats, staff and Afghan interpreters had the chance to evacuate first.

“When you look at what’s happened over the last week, was it a failure of intelligence, planning, execution, or judgment?” Stephanopoulos asked.

“Look, I don’t think it was a fair — look it was a simple choice, George,” Biden replied. “When they — when the Taliban — let me back up and put it another way. When you had the government of Afghanistan, the leader of that government getting in a plane and taking off and going to another country, when you saw the significant collapse of the Talib — Afghan troops we had trained, up to 300,000 of them — just leaving their equipment and taking off, that was, you know, I’m not — that’s what happened. That’s simply what happened.”

The ABC News clip then jumps to another part in the interview, when Biden gives his assessment of what went wrong.

“But we’ve all seen the pictures,” Stephanopoulos said. “We’ve seen those hundreds of people packed into a C-17. We’ve seen Afghans falling”…

“That was four days ago, five days ago,” Biden interrupted angrily.

“What did you think when you first saw those pictures?” Stephanopoulos pressed.

Stephanopoulos was not persuaded by the president’s excuses.

“No— I don’t think it could have been handled in a way that — we;re gonna go back in hindsight and look, but the idea that somehow there’s a way to have gotten out without chaos ensuing. I don’t know how that happens.”

This is perhaps the most tone-deaf and damning statement Biden could have made, because it belies that he went against the advice of his generals with his Afghan withdrawal order.

The military advice given to President Biden was detailed in a Wall Street Journal article following his Monday speech on the Afghanistan withdrawal. It is an indictment of the Commander-in-Chief’s decision and shows that the horrific aftermath is due to Biden’s failure to properly assess the risks of an immediate military withdrawal.

“The president’s top generals, including Chairman of the Joint Chiefs of Staff Army Gen. Mark Milley, urged Mr. Biden to keep a force of about 2,500 troops, the size he inherited, while seeking a peace agreement between warring Afghan factions, to help maintain stability,” the Wall Street Journal reported. “Defense Secretary Lloyd Austin, who previously served as a military commander in the region, said a full withdrawal wouldn’t provide any insurance against instability.”

“In a series of meetings leading up to his decision, military and intelligence officials told Mr. Biden that security was deteriorating in Afghanistan, and they expressed concerns both about the capabilities of the Afghan military and the Taliban’s likely ability to take over major Afghan cities,” the report continued.

Biden’s unwillingness to face questions about the Afghanistan disaster at his press conference, and his truly oblivious remarks at his interview with George Stephanopoulos, reveal a man whose cowardice and ineptitude are resulting in the waste of military efforts carried out over two decades. Even more tragically, it is also costing innocent people their lives.

The office of the presidency is entirely beyond the powers of Biden to run. His performance during the Fall of Afghanistan simply reveal a president who is unfit to lead.