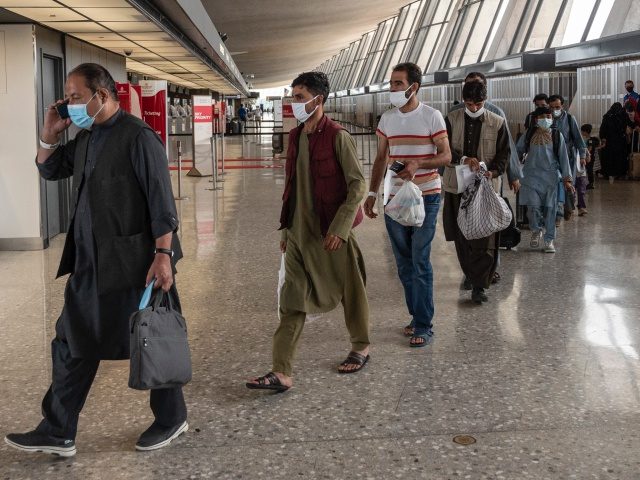 Up to 100 Afghans evacuated from Afghanistan and seeking to resettle in the United States have been “flagged” by Defense Department terrorism watch lists, according to a new report.

As President Joe Biden’s administration looks to fast-track tens of thousands of Afghans into the U.S. interior over the next few weeks, Defense Department officials are reportedly sounding the alarm over the potential for fraud.

An official, involved with the vetting and screening process taking place in third safe countries for Afghans seeking resettlement in the U.S., told Defense One that “up to 100 of the 7,000 Afghans evacuated as prospective recipients” of

Another official said that in “most cases” the Afghans were “cleared by follow-on screening” for resettlement in the U.S.

“There’s certainly been a number of them” who triggered alerts, requiring agents to pull those evacuees aside for further screening, the first official said. In most cases, those Afghans — many of whom have already been vetted through the special immigrant visa process — were cleared by follow-on screening. [Emphasis added]

An official told Defense One that most of the Afghans “flagged” as potential matches to individuals on terrorism watch lists are being screened and vetted at the Al Udeid Air Base in Doha, Qatar, but stated that he “can’t rule out” such terrorism flags not occurring at other bases.

On the ground in the third safe countries, officials said Customs and Border Protection (CBP) agents are having to utilized”old tech” that “they don’t know how” to use and complained that there are not enough agents deployed to aid in proper vetting.

This week, NBC News detailed how fraud is already occurring within the massive Afghanistan-to-U.S. resettlement effort by the Biden administration.

At the Hamid Karzai International Airport in Kabul, Afghanistan, State Department officials said there have been five cases where Afghans attempted to use fraudulent American passports to try to get on flights bound for the U.S. The passports, the officials said, did not belong to the Afghans. The report stated:

The U.S. mission team reported at least five cases of Afghans who presented U.S. passports that didn’t belong to them, according to the Sunday dispatch from the Afghanistan Task Force, highlighting fraud concerns and complicating the process of screening people to enter the airport.

Though Biden has repeatedly suggested that Afghans are being fully vetted and screened outside the U.S., thousands are arriving each day who have not yet completed their immigration processing.

Afghans still in the application phase of their processing are being relocated to Fort Bliss in Texas, Fort Lee in Virginia, Fort McCoy in Wisconsin, and Fort Dix in New Jersey.