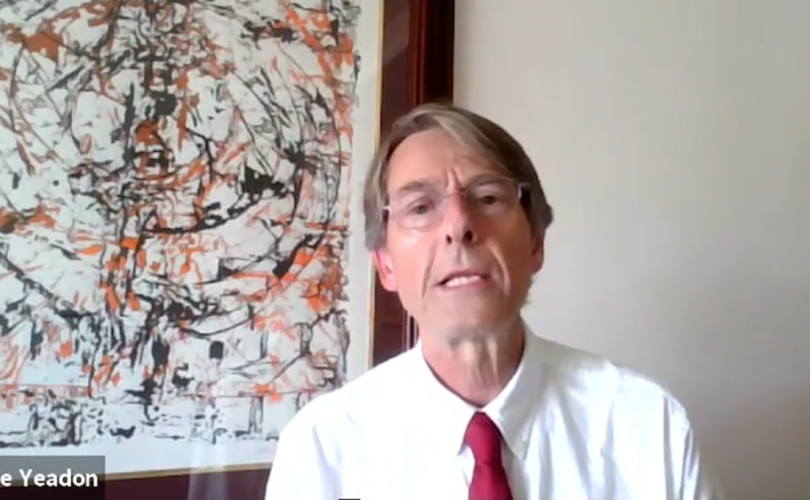 Scientists have known for nearly a decade that the lipid nanoparticles like those currently used in novel mRNA COVID vaccines accumulate in ovaries and are potentially toxic to reproductive health, a former vice president and top researcher at Pfizer said at a conference hosted by LifeSiteNews Thursday on the fertility dangers of COVID vaccines.

“You’re not being told the truth,” said Michael Yeadon, former Pfizer Vice President and Chief Scientist Worldwide for Respiratory Pharmacology and Toxicology, who is now the Chief Scientific Advisor for the Truth for Health Foundation. “Thinking about this, I try to imagine that I was speaking to my own young adult daughters, for whom I would be very concerned if they got these vaccines.”

Yeadon cited scientific papers dating back to 2012 that warn of potential reproductive hazards of lipid nanoparticles that are used in COVID shots.

Both Moderna’s and Pfizer’s mRNA vaccines use specialized nanoparticle lipids or lipoproteins as carriers for their main ingredient – unstable mRNA protein that causes cells to produce the notorious coronavirus spike protein and elicit an immune response. These are the molecules that required the extremely low temperatures to preserve stability of the lipid encasing the fragile mRNA.

German researchers reported in their paper published nine years ago, “Accumulation of nanocarriers in the ovary: A neglected toxicity risk?,” that there is a “potential toxicity risk of all nanoscaled drug delivery systems” and an accumulation of different microscopic carrier molecules in rodent ovaries. Their research involved injection of lipid “nanocarriers,” including some with an ingredient common to both Pfizer’s and Moderna’s mRNA COVID vaccines: polyethylene glycol.

Instead of loading the carriers with drugs or mRNA, the researchers from Martin Luther University Halle-Wittenberg Department of Pharmaceutical Technology and Biopharmaceutics and the University of Regensburg loaded the nanocarriers with a fluorescent dye they could trace. They reported a “high local accumulation of nanoparticles” in “specific locations of the ovaries” in all mice and rats treated with five different nanocarrier drug delivery systems of different sizes.

The German researchers warned that this accumulation in ovaries may alert to an “important toxicity issue in humans,” but they did not know. Perhaps, it “might as well open a new field of targeted ovarian therapies,” they reported and concluded that further study was necessary to discover the unknown impact of the phenomenon.

These findings confirm a Pfizer “biodistribution study” of its lipid nanoparticle carrier system in lab animals which showed that the vaccine nanocarrier molecules leave the muscle site of injection, enter blood circulation, and then accumulate in organs and tissues, including the spleen, bone marrow, the liver, adrenal glands, and especially the ovaries.

The biodistribution study looked only at the nanoparticle carrier proteins and did not include the vaccine ingredient mRNA, which presumably would be delivered inside the carrier in the real world experiment and trigger production of spike protein in the cell it lands in, as intended.

“We never, ever give experimental treatments to pregnant women,” said Yeadon, pointing to the Thalidomide disaster, in which doctors gave women a drug in the 1950s and 1960s to treat nausea in pregnancy, resulting in thousands of children being born with severe deformities, including malformed organs, leading to death, shortened limbs, and missing fingers and toes.

“Thalidomide taught everyone a lesson. Now we know harms can happen, and so we’ve spent the last 60 years being really careful,” said Yeadon.

The Centers for Disease Control and Prevention (CDC) recommends all current experimental COVID vaccines, which have been granted Emergency Use Authorization only and are still in human clinical trials for another year at least, for pregnant and breastfeeding mothers.

Yeadon called government promotion of the vaccines to pregnant women and young women of reproductive age “stupid and reckless.”

“When they say they’re safe, you must know they don’t know that. They’ve not been around long enough for them to possibly evaluate.”

Yeadon, who has served as consultant to over 30 biotech companies and founded his own biotech company that later was sold to pharmaceutical giant Novartis, cited other research showing that the spike protein from the coronavirus, which all the current vaccines are based on, has similarities to human proteins that could induce autoimmune reactions, including reactions affecting fertility.

Data showing that 15 pregnant women who were vaccinated developed three-fold higher levels of antibodies against their own placentas was dismissed and hidden by the vaccine industry and public health, he said.

‘Do not take these vaccines’

The risks of ingredients in the COVID vaccines to fertility are too well documented to have been simply ignored, Yeadon suggested. “Do not take these vaccines,” he warned. “There’s a severe risk to your ability to conceive and carry a baby to term. Worse, these are deliberate acts which I believe whoever is doing it is lying about it to hide it and they’re smearing people who are trying to warn you. Who do you trust?”