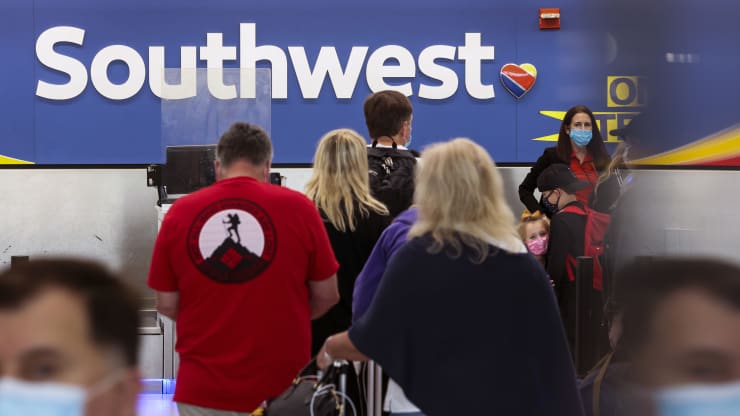 Southwest Airlines has scrapped a plan to put unvaccinated employees who have applied for but haven’t received a religious or medical exemption on unpaid leave starting by a federal deadline in December.

Southwest Airlines and American Airlines are among the carriers that are federal contractors and subject to a Biden administration requirement that their employees are vaccinated against Covid-19 by Dec. 8 unless they are exempt for medical or religious reasons. Rules for federal contractors are stricter than those expected for large companies, which will allow for regular Covid testing as an alterative to a vaccination.

Executives at both carriers in recent days have tried to reassure employees about job security under the mandate, urging them to apply for exemptions if they can’t get vaccinated for medical or for a sincerely held religious belief. The airlines are expected to face more questions about the mandate when they report quarterly results Thursday morning. Pilots labor unions have sought to block the mandates or sought alternatives like regular testing.

Southwest’s senior vice president of operations and hospitality, Steve Goldberg, and Julie Weber, vice president and chief people officer, wrote to staff on Friday that if employees’ requests for an exemption haven’t been approved by Dec. 8, they could continue to work while following mask and distancing guidelines until the request has been reviewed.

The company is giving employees until Nov. 24 to finish their vaccinations or apply for an exemption. It will continue paying them while the company reviews their requests, and said it will allow those who are rejected to continue working “as we coordinate with them on meeting the requirements (vaccine or valid accommodation).”

“This is a change from what was previously communicated. Initially, we communicated that these Employees would be put on unpaid leave and that is no longer the case,” they wrote in the note, which was reviewed by CNBC.

Southwest confirmed the policy change, which comes just weeks before the deadline.

United Airlines implemented its own vaccine mandate in August, a month before the government rules were announced. United had told staff that they would be put on unpaid leave if they received exemptions. More than 96% of its staff is vaccinated. Some employees sued the company over the unpaid leave and a federal judge in Fort Worth, Texas, has temporarily blocked the airline from going forward with its plan.