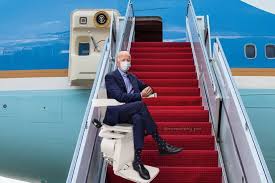 President Biden on Thursday said, “I guess I should go” to the US-Mexico border, but that he hasn’t been able to find the time — despite spending at least part of 70 days in office collecting some R&R at one of his Delaware homes.

Biden said during a CNN town hall that he’s been to the border before, a claim for which Fox News recently reported it was unable to find evidence, and that he might go again.

“I’ve been there before and I haven’t — I mean, I know it well. I guess I should go down. But the whole point of it is I haven’t had a whole hell of a lot of time to get down,” he said.

“I’ve been spending time going around looking at $900 billion worth of damage done by hurricanes and floods and weather and traveling around the world. But I plan on — now my wife Jill has been down. She’s been on both sides of the river, she’s seen the circumstances there, she’s looked into those places.”

It’s unclear when Biden, who is a former senator and vice president, may have visited the border in the past and he gave no indication of timing.

White House Press Secretary Jen Psaki last month was asked at a press briefing for information on whether Biden had ever visited the border. She said, “I will have to look back in my history books and check the times he’s been to the southern border.”

Biden in March appointed Vice President Kamala Harris to address the “root causes” of migration from Central America — bestowing onto his No. 2 the unenviable task of stemming the flow of asylum-seekers since Biden took office.

In August and July, apprehensions of people who illegally crossed the border exceeded 200,000 — even more than when the crisis began earlier this year.

Illegal immigration into the US hit an at least 35-year record in fiscal 2021, the Washington Post reported this week, with about 1.7 million arrests.

Republicans argue that Biden’s policies are to blame for the surge in migration — a stance also taken by Guatemala’s president and Mexico’s president.

Biden also ended Trump’s “Remain in Mexico” policy that required asylum seekers to await the rulings of US courts while remaining physically in Mexico. The Biden administration is preparing to reimplement that program to comply with court orders, but says it will try to end the program again with a more court-compliance justification.