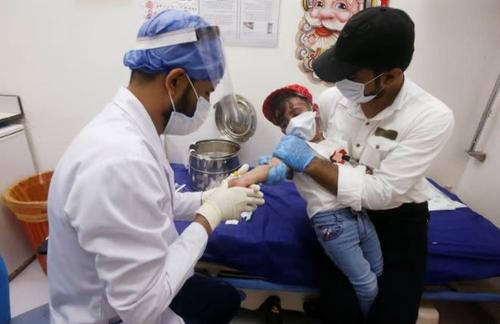 All summer long, Dr. Anthony Fauci, CDC Director Rochelle Walensky and other unelected federal bureaucrats have been warning that COVID cases will explode as soon as teachers and students return to classrooms in person this fall, which is why Dr. Fauci has been one of the loudest voices cheering on politicians like NYC’s de Blasio and others who have imposed such mandates on teachers and school employees (which has since been expanded to cover most, if not all, city employees). But just as Pfizer, Moderna and their allies in the federal bureaucracy prepare to declare mRNA vaccines safe for all students between the age of 5 and 11, Bloomberg has just pointed out a remarkable shift: hospitalizations involving US children (already extremely rare compared with the adult population) have fallen sharply as schools reopen.

The number of children who have been hospitalized or died in the US due to COVID has remained extremely small: while the number of US minors who have been confirmed positive with COVID has numbered about 5MM since the start of the pandemic, fewer of 700 of those people have died. When it comes to hospitalizations, the difference between infected adults and children is pretty dramatic.

Despite this, many are pushing for children to also be required to get the vaccine as soon as it’s approved for their age group (or face the same kind of alienation that their parents are currently being subjected to). The disagreements have turned communities against one another.

But while the Big Pharma machine gears up to shove vaccines down the throats of children and their parents, the phenomenon of falling hospital positions simply can’t be ignored, even by the MSM, which is quite practiced at that particular skill.

Daily pediatric admissions with confirmed Covid have fallen 56% since the end of August to an average of about 0.2 per 100,000, according to Department of Health and Human Services data. Among adults, new admissions fell 54% to 2.1 per 100,000 in the same period, the data show.

Here’s a visualization for those who prefer to be shown, not told.

It’s no secret that America’s school board meetings have transformed into battle grounds used by people either demanding masks be worn by students, and concerned parents who worry the masks will impact that education. Battles over vaccine mandates and whether CRT should be taught in school have also set off battles in communities across the country.

In some GOP-led states, schools have dropped their school-related mandates, sometimes under pressure from the governor. The Delta variant and its new sub-variant were supposed to trigger the worst phase of the outbreak yet. Instead, it looks like COVID numbers truly are moving down and staying down, especially in states like Florida, which were once heavily criticized for their lack of mandatory precaution.

Alarm bells went off during the spring when tthe CDC saw the percentage of children being hospitalized with COVID rise slightly. However, they eventually figured out that it was merely a factor of falling hospitalization numbers among adults as more Americans became “fully vaccinated”.

Kid between 12 and 15 didn’t have access to the jab until May. But Dr. Fauci has promised to vaccine all children as young as six months old as the end of the year. The question here, however, is who’s really benefiting from this vaccine overkill? Big Pharma – certainly. But is America really benefiting? How about the developing world?

However, if you think this is the end of the push to vaccine every American with a pulse, there’s already a big new scary variant on the horizon to help convince parents to change their minds.