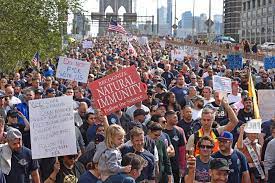 At least 20 people were arrested during the protest, a police source said.

Days after the mayor announced that all government employees except for jail staff will need to receive a vaccine shot by Friday or be placed on unpaid leave, about 5,000 incensed demonstrators marched over the Brooklyn Bridge to Manhattan.

Many carried American flags, chanting, “F–k de Blasio” and “We will not comply!”

Some protesters wore NYPD and FDNY shirts, and several hoisted Gadsden “Don’t Tread on Me” flags, while others took to the extreme of wearing yellow stars of David to compare the inoculation requirement to Nazi Germany’s persecution of Jews.

“Now, [after] working after countless of emergencies — Hurricane Sandy, the snowstorms … I am under threat. We are under threat of losing our livelihood for simply retaining the choice of protecting our bodies,” fumed firefighter Sofia Medina after the crowd reached City Hall.

“Why now are we being bribed and coerced to take a medication. … We are not now nor have ever been a public health threat.”

“Leave us alone and let us work,” she said to de Blasio. “Get out of the way for those of us who want to work and show up on time.”

“Mayor de Blasio wants to paint us as immoral, unsafe, and a danger to the public. To the citizens of the city, we want to continue protecting you,” bellowed Paul Schweit, who was wearing an FDNY shirt.

“Thousands of good cops and city municipal workers stand to lose their jobs,” said a police officer. “Are the good people of New York City confident adequate people will fill those positions. I’m frightened of what comes next?”

The cop wondered, “Under the authority of Mayor de Blasio, what will be the next order for the NYPD?”