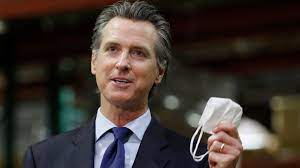 Governor’s Office claimed that Newsom would attend the summit virtually, though he still has not made a video appearance

Newsom was last seen in public on October 27, receiving a COVID-19 booster shot in Oakland. He said it was painless and then flexed in celebration, urging others to get boosters as well.

Two days later, his office issued a statement citing unspecified family obligations, abruptly cancelling his plans to attend the global climate conference, a huge gathering of international leaders on a subject that is among his highest priorities.

The statement claimed that Newsom would attend the summit virtually, though he still has not made a video appearance. California’s lieutenant governor led the delegation in his place. No further information on the ‘family obligations’ that caused the sudden alteration to his schedule have been shared.

Since then, Newsom has been seen only in prerecorded video statements, and in family Halloween photos posted on Monday, in costume as a pirate with his wife and four young children.

‘The governor has been working from the Capitol this week,’ a spokeswoman for Newsom told DailyMail.com on Saturday, dismissing any suggestion that the COP26 cancellation was connected to Newsom’s booster shot as ‘misinformation.’

After the federal government late Tuesday authorized Pfzier’s coronavirus vaccine for emergency use for kids 5 to 11, California implemented what state officials deemed a ‘robust vaccination program.’

It’s the kind of announcement that Newsom typically makes in-person in front of TV cameras, but the governor’s office announced the plan with an emailed news release.

His Twitter account went dark from October 28 until Tuesday, when he tweeted Election Day support to fellow Democratic Governors Phil Murphy of New Jersey and Terry McAuliffe of Virginia, who were seeking reelection.

As the week went on, Newson’s Twitter account was more active, tweeting about climate change, urging children to get vaccinated, and praising President Joe Biden’s vaccine mandates for large companies.

It’s rare, but not unprecedented, for Newsom to go a whole week without some type of appearance. Such absences are usually explained, including when Newsom leaves the state for vacation.

In this case, the only statement from Newsom’s office came October 29 and referred to unspecified family obligations. No additional information about the family’s circumstances has been released.

As more ‘vaccines’ are injected into Americans’ arms, ‘breakthrough’ COVID cases are increasing and spreading