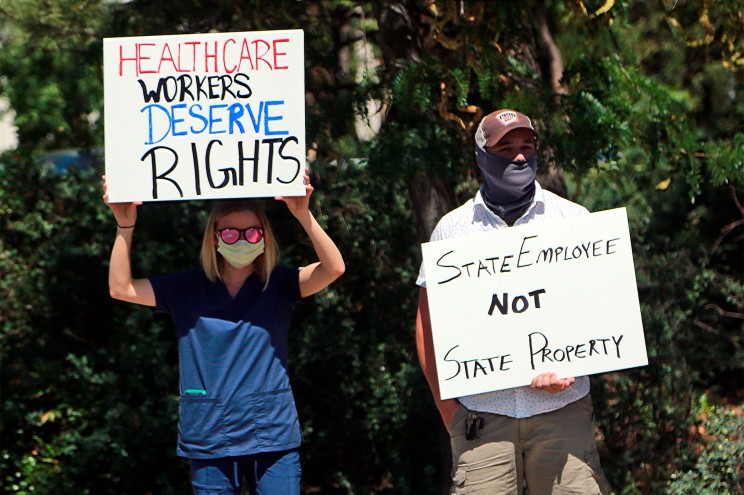 Federal court barred the Biden administration from enforcing a vaccine mandate for health care workers in 10 states who are employed at federally-funded health care clinics – “In general, the overwhelming lack of evidence likely shows CMS [Center for Medicare and Medicaid Services] had insufficient evidence to mandate vaccination on the wide range of facilities that it did.“

A federal judge put the brakes on a COVID-19 vaccination mandate from the Biden administration that would’ve required thousands of health care workers in 10 states to get their first jab by next week.

US District Judge Matthew Schelp issued a preliminary injunction on Monday in a scathing 32-page order in which he called the requirement a “politically and economically vast, federalism-altering, and boundary-pushing mandate.”

It’s the latest blow to the federal vaccine requirements under President Joe Biden, while more legal challenges pile up.

Schelp, a Donald Trump appointee, said in his ruling that the states who sued the administration were “likely to succeed” in the argument that Congress hadn’t given the federal Centers for Medicare and Medicaid Services the authority to create the mandate. He also said the mandate could put facilities in a bind, without adequate staff to provide services – particularly in rural areas.

“CMS seeks to overtake an area of traditional state authority by imposing an unprecedented demand to federally dictate the private medical decisions of millions of Americans,” Schelp wrote. “Such action challenges traditional notions of federalism.”

The requirement would have affected more than 17 million workers in about 76,000 health care facilities and home health care providers. Under the rule, announced Nov. 4, those affected would have to get their first dose of a vaccine by Dec. 6 and their second shot by Jan. 4.

A previous ruling against the Biden administration temporarily blocked a rule that private businesses with more than 100 employees require workers to be vaccinated or face weekly testing.

The injunction affects the states behind the lawsuit: Alaska, Arkansas, Iowa, Kansas, Missouri, Nebraska, New Hampshire, North Dakota, South Dakota and Wyoming. All of the states either have Republican attorneys general or governors, the AP stated. More lawsuits are pending in other states, according to the news agency.