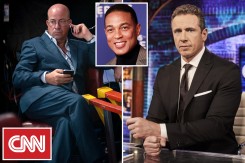 CNN’s ratings took a nosedive by a massive 90 percent both overall and in the all-important demographic coveted by advertisers in the first week of the new year.

The Jeff Zucker-led cable news network averaged just 548,000 viewers during the week of Jan. 3 — a major drop from the nearly 2.7 million viewers for the same week in 2021, according to Nielsen ratings.

The year-ago ratings were jolted by the left-leaning network’s coverage of the Jan. 6 attack on the US Capitol, which resulted in CNN having its most-watched day since Ted Turner launched the news outlet in 1980.

But on the one-year anniversary of the attacks, viewers flipped over to CNN’s right-wing rival, Fox News, which topped the ratings for coverage of the event.

CNN has been plagued by a cascade of high-profile scandals, most notably the firing of its primetime star Chris Cuomo after the anchor was found to be secretly aiding the defense of his embattled older brother, former New York Gov. Andrew Cuomo over sexual harassment allegations that resulted in his resignation.

Lemon, the host of the 10pm show that followed Cuomo before he was fired, faced his own ethics scandal. The primetime anchor was criticized for covering Jussie Smollett’s trial after the Empire actor testified in court that the host informed him via text message that Chicago police did not believe he was the victim of a racist homophobic attack.

Lemon is also being sued by a Hamptons bartender who claims the anchor, who is gay, rubbed his own genitals then shoved his fingers in his face in 2018.

Lemon has denied the bartender’s allegations.

CNN’s ratings decline followed the network’s second most-watched year ever, the Daily Beast reported. Despite having a record year, network viewership trended downward for the second half of 2021. According to Nielsen, CNN has struggled to grab viewers during primetime, between 8 and 11 p.m., recording an 83% year-over-year drop.  It had 4.2 million total primetime viewers during the first week of 2021 and only 705,000 last week.

During the first week of the year, CNN recorded a year-over-year decline of 80 percent of its total audience.

It also lost 89 percent of its primetime viewers among its key demographic and 91 percent of viewers ages 18 to 49.