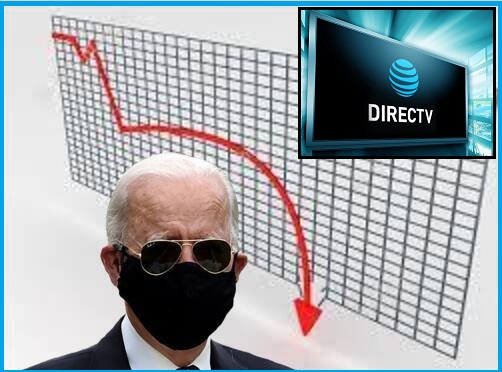 The remarkable aspect to this announcement is the openness of DirecTV’s admission.

Following on the heels of the demand from the White House to start blocking content against the interests of the Biden administration, DirecTV the satellite television communication company now part of the AT&T network, has announced their decision to drop the One America News Network (OANN) channel because OAN is perceived to be supportive of Donald Trump.

(Bloomberg) – DirecTV, one of the largest U.S. pay-TV providers, plans to drop One America News Network, dealing a major blow to the conservative channel that’s been criticized for spreading misinformation and had a loyal fan in former President Donald Trump.

The satellite-TV provider has notified OAN’s owner, Herring Networks Inc., that it plans to stop carrying the company’s two channels when their contract expires. Herring Networks also owns AWE, a lifestyle channel that stands for “A Wealth of Entertainment.”

“We informed Herring Networks that, following a routine internal review, we do not plan to enter into a new contract when our current agreement expires,” the company said in an emailed statement to Bloomberg News.

DirecTV’s contract with Herring Networks expires in early April, according to a person familiar with the matter. Herring Networks didn’t immediately respond to a request for comment. (read more)

Given the fact that Joe Biden only holds support of somewhere around 30% of the country, this move by AT&T/DirecTV is quite remarkable.

One would think that someone in the corporate boardroom, perhaps someone associated with the best business decision, would give pause to any consideration of kowtowing to the demands of cancel culture.

Alas, it seems that voice was not present, or at least insignificant to the objectives of the corporate decisionmakers.

Any corporation making politics the central point of their business intent is automatically reducing the potential audience by half.   There must be a strongly declining business model for the satellite broadcasting industry as a whole in order to make such a decision.

Perhaps the subscription-based entertainment and news alternatives have eroded the baseline for the TV business.  I genuinely do not know.  However, on its face, this type of a corporate decision seems like financial suicide.

Even DirecTV customers who may not watch OAN, yet retain some reasonable disposition to see a slippery slope as it becomes evident, are likely to view this decision negatively.

Regardless of the internal or background conversation, one thing is certain, DirecTV will lose more customers than it will gain.  That is just a predictable outcome whenever you make political affiliation a litmus for a product.