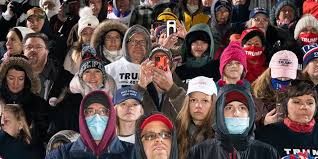 Nearly two years after former President Donald Trump tossed politics into the nation’s battle against the coronavirus, the partisan divide appears to have grown, with Republicans fighting mandates and Democrats calling for harsh punishments for those who refuse to get vaccinated.

In an expanded survey of the public’s view of mandates and punishments to get people vaccinated, Rasmussen Reports found that Democrats even support fines, home confinement, and prison for those who fight the government on masks and shots.

Over several questions in the survey for the Heartland Institute, the differences in how Republicans and Democrats view the crisis were stark.

Consider: Twenty-nine percent of Democrats would go so far as to support taking children away from parents who refused to be vaccinated.

The first question in the survey set the tone. It asked if likely voters approved of coronavirus czar Dr. Anthony Fauci. Just 21% of Republicans said they view him favorably, compared to 75% of Democrats.

Next came a question on President Joe Biden’s mandate that companies of 100 employees or more should demand workers to get vaccinated. Just 22% of Republicans agreed, while Democrats were all in at 78%.

Asked if voters favor a federal or state fine for those who refuse a vaccine, only 19% of Republicans said “favor” to 55% of Democrats.

Rasmussen next asked if people favor home confinement for those who are not vaccinated. On the GOP side, 79% were opposed, while 59% of Democrats favored it.

The survey also asked about those who challenge the government’s view of vaccines and if opponents should be jailed or fined for questioning it on social media. A remarkable 48% of Democrats supported those punishments.

And nearly half of Democrats favored fixing tracking devices on those who refused to vaccinate.

Rasmussen added that Biden supporters would go even further than Democrats.

“President Biden’s strongest supporters are most likely to endorse the harshest punishments against those who won’t get the COVID-19 vaccine. Among voters who have a Very Favorable impression of Biden, 51% are in favor of government putting the unvaccinated in “designated facilities,” and 54% favor imposing fines or prison sentences on vaccine critics,” said the pollster.