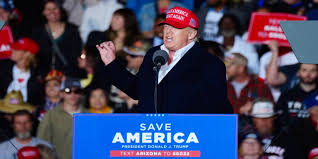 Donald Trump has slammed President Joe Biden once again, suggesting something is not ‘normal’ with his successor and listing perceived shortfalls exactly one year after Biden took office.

In a phone interview with Fox News host Sean Hannity on Thursday, Trump said of Biden ‘I want him to do well’, but went on to reel off a litany of complaints about the Democrat’s first year.

Trump lashed out at Biden over mostly familiar topics, including the disastrous US withdrawal from Afghanistan, soaring inflation, and a surge of illegal crossings at the southern border.

He also slammed Biden’s press conference on Wednesday, saying the president gave a ‘green light’ to Russia to invade Ukraine by pondering a limited response to a ‘minor incursion,’ remarks that the White House hastily walked back.

Asked whether Biden seemed to be ‘struggling cognitively’, Trump responded: ‘When you watch the press conference, I don’t want to be the one to say, but that’s not a normal situation going on there.’

Biden’s press conference, his first formal one in 10 months, immediately sparked controversy and concern over his comments on Russia.

Biden and top administration officials worked Thursday to clean up his comments.

Reading from a script, Biden stressed that if ‘any assembled Russian units move across the Ukrainian border, that is an invasion” and it would be met with a “severe and coordinated economic response.’

Trump in his interview slammed Biden’s performance in the press conference and zeroed in on his controversial remarks on Russia.

‘What he said last night, when he said “They may go in, they will go in,” and he talks about a minor incursion. I said, I don’t believe he said that,’ said Trump.

‘You’re really telling them: “You might as well go in.” You can’t just talk in terms of sanctions. Sanctions don’t mean too much to Russia,’ said Trump.

‘If you want to stop somebody, you are not going to just be talking about sanctions. I think this is a whole different ball game right now,’ he added.

‘Even I, I look at it and I feel ashamed at what has happened in the last year with our country,’ added Trump.

Trump claimed that he had a ‘very good relationship with Putin’, but also argued that he ‘stopped their pipeline’, an apparent reference to the Nord Stream 2 natural gas pipeline from Russia to Western Europe, a key Putin initiative.

Trump’s remarks come as speculation continues to swirl that he will launch a campaign to retake the White House in 2024.

They also come close on the heels of a Supreme Court ruling on Wednesday slapping down his attempt to block the release of White House documents to the House committee investigation the US Capitol riot.

The ruling will further the House select committee’s probe, which is seeking to establish what role Trump himself played in fomenting the violence last January 6.

But Trump in the interview blamed Speaker Nancy Pelosi for security lapses at the Capitol, claiming it could have been ‘an absolutely lovely day.’

Trump claimed there was ‘a lot of love’ in the air at his rally on the Ellipse just prior to the riot.

‘Believe me, there was a lot of love and a lot of friendship and people that love our country. These are great people,’ he said of the rally.

Following the rally, thousands of Trump’s supporters marched to the nearby Capitol and stormed it, disrupting the certification of Biden’s election.

Trump claimed that Pelosi had turned down his offer to boost security at the Capitol ahead of January 6.

‘If you have 5,000 soldiers wrapped around the Capitol, he would’ve had no January 6th as we know it. There would have been no problem whatsoever, but they turned it down,’ he claimed.

‘I wanted to have soldiers and/or National Guard, and Nancy Pelosi turned it down. If she didn’t turn it down, you would not have had any problem. It would have been absolutely a lovely day,’ Trump added.

In the wide-ranging interview, Trump also defended his administration’s handling of the COVID-19 pandemic, saying ‘we haven’t been getting the credit we deserve.’