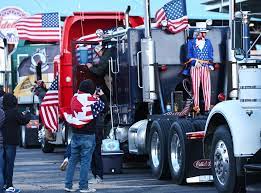 After a nearly 2,500-mile journey from southern California, the now estimated 30-mile-long People’s Convoy is set to reach Washington D.C. Sunday morning in a call for ‘freedom’ and the removal of ‘unconstitutional’ COVID-19 mandates.

The convoy arrived at Hagerstown, Maryland – the final stop before one last stretch to the nation’s capital which is now around 75 miles away or about a 90-minute drive – on Friday night and held a rally attended by at least 1,000 vehicles. The group confirmed to DailyMail.com it will be spending all of Saturday rallying at the Hagerstown Speedway before journeying on to D.C.

On Saturday night, fireworks lit up the night sky and a giant American flag was unfurled, illuminated by the lights of dozens of trucks, as thousands of demonstrators joined the truckers at the speedway.

The convoy’s organizers finally unveiled their plan late Saturday night for the rest of the protest.

The caravan of trucks, cars and SUVs will circle the Beltway – the 64-mile highway surrounding the city – on Sunday morning and into the workweek at the minimum speed limit to slow traffic and to get their message to lawmakers, according to the Washington Post.

Brian Brase, one of the organizers, said the plan is to drive around the Beltway twice before returning to the Hagerstown Speedway. Each day this week, the convoy will clog one of the main arteries into DC until the group’s demands are met, Brase told The Post.

Another organizer did not rule out the trucks honking their horns along Pennsylvania Avenue.

‘I can tell you now that there will be select trucks going to the White House,’ organizer Dan Fitzgerald revealed on his Friday morning livestream. ‘I don’t want people thinking we are invading D.C. This is not the convoy going into D.C. commons. This is a few select drivers.’ 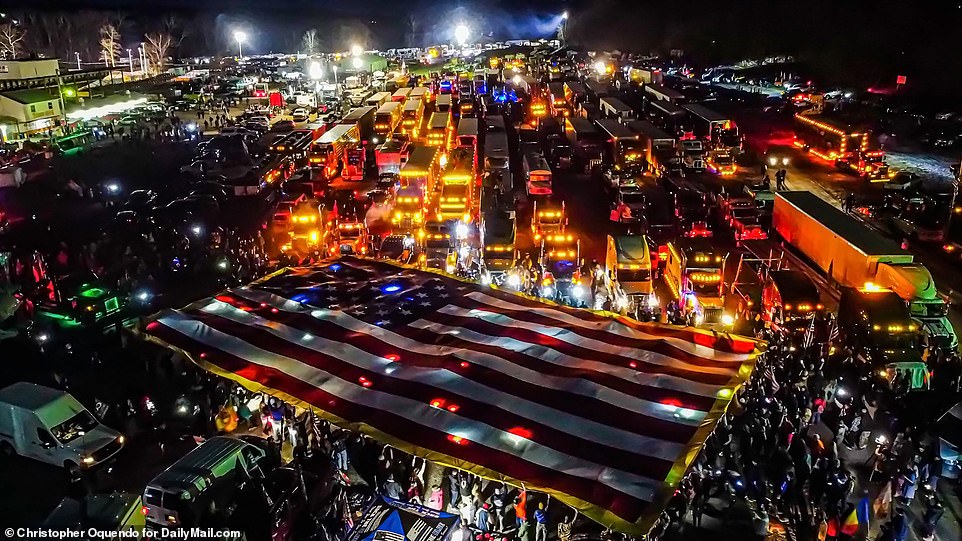 The group’s planned arrival in the capital city has prompted security concerns and placed authorities on high-alert. D.C. and Capitol Police have called on agencies from Maryland and Virginia, as well as the National Guard, to monitor the group. Officials say the fencing around the Capitol has been put back up ‘out of an abundance of caution’.

D.C. police spokesperson Dustin Sternback has called the convoy a ‘fluid situation’ and noted Friday: ‘Any sort of response strategies will be implemented in real time.’

The People’s Convoy – a spinoff from a protest in Canada started by truckers upset at vaccine requirements to cross the Canadian border – is demanding that President Joe Biden end the national emergency originally declared at the start of the pandemic, as well as scrap any remaining coronavirus mandates. The truckers allege the government has infringed upon their constitutional rights with the mandates. 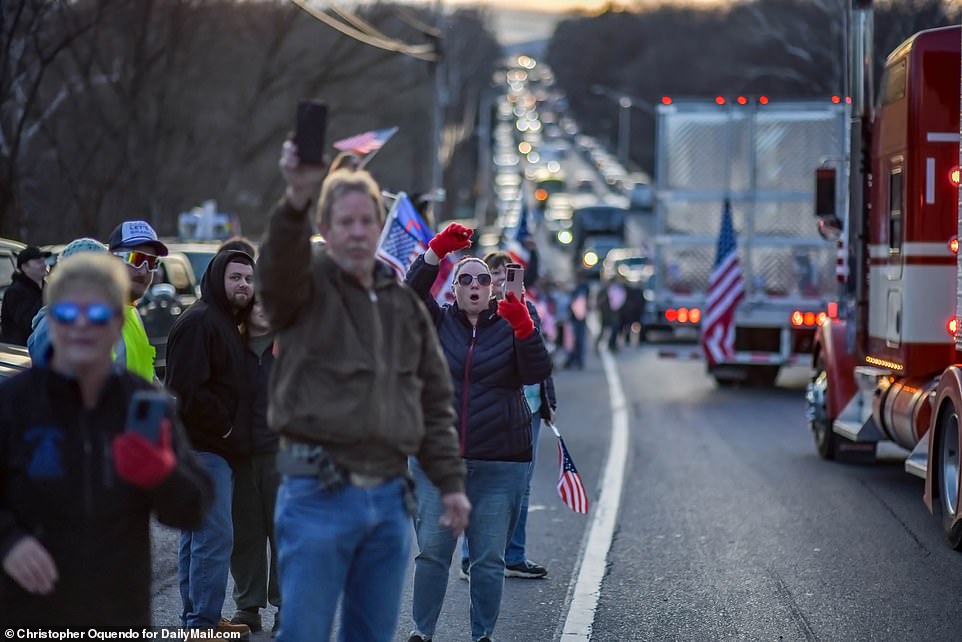 HAGERSTOWN, MARYLAND – MARCH 4: Crowds of supporters waving and cheering the People’s Convoy as drivers arrive at the Hagerstown Speedway in Maryland

However, nearly every state in America has either lifted or relaxed indoor mask mandates, or has set a date to do so in the near future. The lone holdout is Hawaii, the island state that has had the strictest mandates of anywhere in the country throughout the pandemic. Additionally, only 19 states currently have vaccine mandates in effect, according to the National Academy for State Health Policy – but the mandates do not apply to all individuals and their requirements vary by state.

Some political analysts allege the group is also calling for over-arching federal accountability and addressing additional political issues such as the alleged ‘fraudulent’ 2020 election and Russia’s invasion of Ukraine.