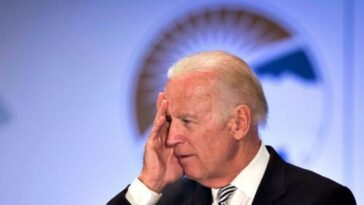 “I don’t think that a woman has the sole right to say what should happen to her body,” he told the Washingtonian in 1974, one year after the court legalized abortion.

“I don’t like the Supreme Court decision on abortion. I think it went too far,” he added.

Biden doubled down years later in 1982 when he voted to approve a constitutional amendment that would have allowed abortion to become a state issue instead of a federal one.

Then-Senator Biden “was the only Democrat singled out by the New York Times at the time as supporting the amendment that the National Abortion Rights Action League called “the most devastating attack yet on abortion rights,’” the New York Post reported.

On Tuesday, however, President Biden flip-flopped and supported the Court’s 1973 decision. “Roe has been the law of the land for almost 50 years, and basic fairness and the stability of our law demand that it not be overturned,” he said. “I believe that a woman’s right to choose is fundamental.”

“But even more, equally profound is the rationale used. It would mean that every other decision relating to the notion of privacy is thrown into question,” Biden claimed.

The Democrat Party was in the early 1900s a workers’ party, geared toward the American family. It has since become deconstructed by ideology into intersectionality. Now the Democrat Party is a “coalition” of marginalized and opposed groups that allegedly form a whole.

“We’re not a cult, we’re a coalition,” Rep. Hakeem Jeffries (D-NY) explained in April. “If you’re a cult it’s very easy, you just take orders from the cult leader. … Just bend the knee to the cult leader and fall in line.”

Former President Barack Obama was the first leader of the Democrat Party to successfully wield intersectionality. But under President Joe Biden, the politics of intersectionality has fallen prey to party infighting, such as between Rashida Tlaib (D-MI) and Sen. Joe Manchin (D-WV).